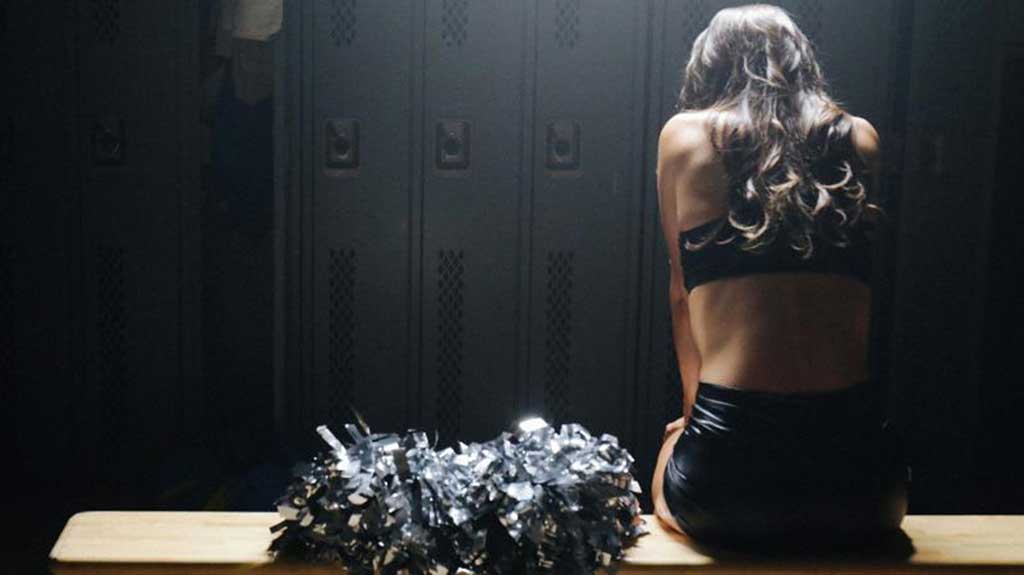 I watched Yu Gu’s film A Woman’s Work — The NFL’s Cheerleader Problem in October as part of a series organised by ObjectIFS, called Remedy for Rage. I had watched a Refinery29 short earlier, that spoke about the exploitation and discrimination faced by NFL cheerleaders, and wanted to understand more about their plight.

A Woman’s Work is a documentary about two former cheerleaders—Lacy Thibodeaux-Fields and Maria Pinzone who independently sue their respective NFL teams for wage theft and discrimination. The film starts off by giving us glimpses of their lives from before the lawsuits—we see two talented, ambitious women who put in the long hours of practice to hone their dance skills over several years, winning several accolades along the way. It reveals the uncertainty and trepidation with which they make the difficult decision to sue the teams they had until then cheered for, putting their dream jobs at risk. It highlights the trials and tribulations they face as they put up their fight, how they persist despite all odds. Their only guiding force is the knowledge that they are fighting for what’s right, that they are fighting for their peers who don’t have the privilege to speak up and for the young girls who dream of taking up this work one day —making for a very inspiring tale.

I found the film very effective because not only did it inform—the egregious conditions to which the pro-cheerleaders are subjected to by the NFL was by itself a revelation to me—but it also brought to the fore several issues that I found myself pondering over long after the film had ended. It offered a perspective that forced me to evaluate my own biases with respect to gendered occupations that I may not have even realised I had.

We learn that cheerleaders are only paid at the end of the season, with practices and special appearances not covered. They pay for their own uniforms and make-up, and are even forced to sell the swim-suit calendars that they pose for. We see that when they do get paid, the amount turns out to be less than the minimum hourly wage guaranteed by the law. We observe that this is being done to them by a sports behemoth that rakes in $15B a year.

Further, we learn that they are regularly body-shamed and subjected to humiliating jiggle tests before games; that they are given handbooks that mansplain topics ranging from personal hygiene to management of their personal social media accounts; that they are barred from fraternising from players while the players are allowed to be as they please; that they can have their pay docked on the flimsiest of pretexts.

We understand the NFL has been able to get away with all of this for over 40 years!

Cheerleaders on the team are routinely told that their job is to be seen and not heard — they don’t possess the right to complain as they are easily replaceable, they are told they are fortunate to land a place on the squad and have the opportunity to perform at such a stage. This damages their self-worth and undermines the years of hard work that they put in to make the team. This also has long-term consequences, as can be seen when a few former cheerleaders are interviewed in the film. They chide the younger women—the protagonists —for being ungrateful and naive, for not realising that their job was never about the money but the sisterhood and the joy of performing in front of millions.

Why shouldn’t they have both?

The film raised a lot of interesting questions around work and compensation for me.

Can work be the reward of itself? This seems ludicrous but this is what the cheerleaders are forced to believe. They are told that the platform and exposure provided by their job should more than make up for their low (or no) pay. I was reminded of an article I had read about how supporting actors in Tamil cinema are underpaid; this kind of manipulation is universal. A female actor who plays a minor supporting role in a film with a big star or a big-ticket director is expected to feel grateful for the opportunity and work for free.

How is work valued? Should a performer only be compensated for their performance? What about the time they spent practising/rehearsing? Why is the work of a home-maker implicitly devalued? Do we include the opportunity cost of making a woman give up her dreams and ambitions in exchange for raising kids and tending to the family? Why do some folks need to repeatedly prove themselves and the value of their work in order to be acknowledged and respected? Why is it that we are able to get behind NFL players when they form a union and demand higher wages, but we can’t think of cheerleaders the same way? This reveals a gender bias ingrained in us that makes us perceive certain vocations as being more valuable and meaningful than others.

What are we being paid for? It is unfortunate that in the case of pro-cheerleading, the athletes are not compensated fairly for their work, but even if they were, does that legitimise the exploitation and gaslighting? We need to realise that our pay is merely compensation for our work — an application of our skills and talents — and this doesn’t mean we consent to put up with a toxic work culture. There is a scene in the Tamil film Velaikkaran (2017) in which a mother tells her son about the sexual harassment she faced at the workplace. She explains that the incident taught her that people tend to feel a misguided sense of loyalty to their employers, dissuading them from calling out exploitative practices at work. “We need to be honest to our work,” she says , “not blindly submit to the wills and fancies of our employer.”

My biggest takeaway from the film was the dichotomy between how employers expect their employees to perceive them and how they perceive their employees in return. Companies always paint the illusion of family, which many of us buy into. However, it is a facade, a lie that they struggle to keep up. When the chips are down, it becomes apparent what we really mean to them, as can be seen in the film. The NFL distances itself from the cheerleaders, even going so far as claiming that the women didn’t add much to the brand or the game, and that they don’t owe them anything— another shameless attempt at devaluing their work.

On one hand, we parade around proudly wearing company-branded T-shirts, take ownership at work, toil to make the company more valuable, and our employers, richer. We cheer for every milestone that the company hits, we willingly accommodate the persona of a selfish, power-hungry corporate giant in our personal identity (I am a Buffalo Jill!). The organisation, on the other hand, doesn’t mind casting us aside at the first sign of rebellion.

There is a line in the film that describes this perfectly, which is probably going to stay with me for a long time. In response to NFL ad campaigns claiming Football is Family, DeMaurice Smith, the Executive Director of the Players’ Association, notes: “You’re not in the will. You’re not part of a family. You’re part of a job.”

I was reminded of another powerful line from the Tamil film Asuran (2019). A young man from a marginalised community thinks he is being treated as an equal and with respect by his employer. He is rudely reminded of his place when he openly challenges his employer’s caste hegemony, in the wake of an incident. He thinks to himself, “And that was when I truly realised how he had seen me all these days.”

I found the courage of Lacy and Maria, as demonstrated in the film, really inspiring. They continue their fight despite being chastised by their seniors, ostracised by their fellow cheerleaders, judged by fans, and their work being openly devalued by their employers. They endure without hoping to make any personal gain for themselves. This is evident when Lacy wins her case and we see the backdated wages she is finally paid out. They were only fighting for what they thought was fair.

I found the post-screening discussion equally enlightening. I heard an activist admit to the challenge of changing mindsets in the face of gaslighting practiced by powerful organisations like the NFL. Discriminatory and exploitative practices are internalised by victims as the norm.

I learnt that speaking up is a privilege.

For example, in the film, both Lacy and Maria were fortunate to have partners willing to support them in their fight. Another audience member wondered about non-white cheerleaders and mentioned how their experiences and ordeals might not be similar to those faced by the protagonists of this film. Often, these nuances are lost when the narrative is controlled by women who are able to speak out — which was a very interesting perspective.

Overall, I found the film to be fitting part of the series  Remedy for Rage because rage is one of the stronger emotions I felt after watching the film. Rage at how a multi-billion dollar institution was able to get away with exploiting its cheerleaders for over forty years, rage that the institution did not apologise for its behaviour when called out for it and was reluctant to make amends, rage at the dichotomy between how employers perceive employees and how they expect employees to see them, rage at the apathy shown by fans towards the cheerleaders.

Throughout the film, the director cleverly intercuts the events of the lawsuits with personal events from the protagonists’ lives. She makes it clear that in spite of the feminist hats that these women end up wearing, they are still expected to perform their roles at home — that of a dutiful mother or partner—proving the old adage that a woman’s work is never done.

[3] Tribeca ’19 Interview: Yu Gu on Not Sitting on the Sidelines for “A Woman’s Work: The NFL’s Cheerleader Problem.” Available here. Accessed on January 6, 2020.

[4] When dreams turn to dust: How Kollywood exploits labour. Written by Sowmya Rajendran, published in The News Minute on July 17, 2019. Accessed on January 6, 2020.

[7] BIFF Review: ‘A Woman’s Work: The NFL’s Cheerleader Problem’ Shows the Ingrained Misogyny of Sportsdom. Written by Jared Mobarak, published in The Film Stage on October 7, 2019. Accessed on January 6, 2020.

[10] Sex on the Sidelines: How the N.F.L. Made a Game of Exploiting Cheerleaders. Written by Michelle Ruiz, published in Vanity Fair on October 4, 2018. Accessed on January 6, 2020.

[12] Fired over an Instagram post and a rumor, Saints cheerleader could force NFL to address double standard. Written by Adam Kilgore, published in the Washington Post on April 4, 2018. Accessed on January 6, 2020.

[14] Ex-NFL Cheerleaders Speak Out Against Sexism and Abuse: ‘We Deserve to Be Respected’. Written by Amy Zimmerman, published in The Daily Beast on April 30, 2019. Accessed on January 6, 2020.

[15] The Sit Down: Lacy Thibodeaux-Fields

[17] ‘15 Strict Rules NFL Cheerleaders Have To Follow During Season’

Amarnath lives in Singapore and writes computer code for a living. While he possesses no film-making knowledge or talent of merit, he loves escaping into the world of a movie and deconstructing it at length with people around who care to listen.