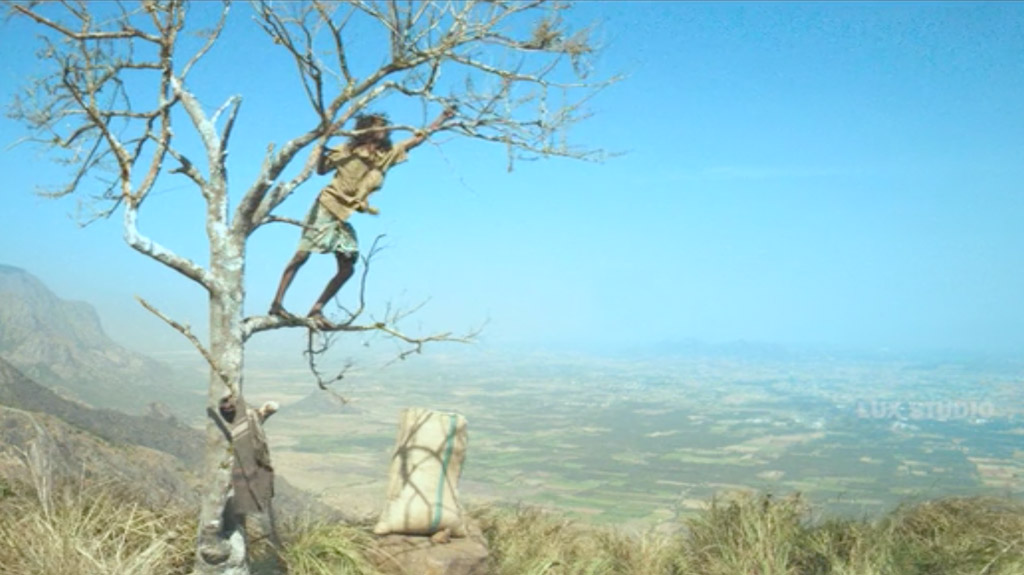 I recently watched two Tamil movies and couldn’t help compare them. I thought they were representative of two major camps of film-making in the Tamil movie industry.

One movie was the big budget Petta, starring Tamil matinee idol Rajinikanth. It got top billing, prime time media coverage, and came to the theaters amidst great fanfare. The other movie was Merku Thodarchi Malai, a small film that was released without much hoopla, but which had garnered great critical acclaim in international film festival circuits.

A big budget Tamil movie, like any movie in the numerous mainstream Indian language movie industries, exists at the confluence of many deceits.

Big budget movies are made such that their monetary success disproportionately accrues to a select few, while their failures are directed to built-in drain pipes that absorb criticism without having to correct for it. This setup, with the lead male actor as the circus lion and the director as the circus master, overshadows every other aspect of the movie. It results in movies with low risks and high rewards for the makers; there is remarkably little to differentiate failed movies from successful ones at the box office.

Since the economics of Tamil movies dictates that longevity ensures a higher probability of a return on investment for everybody involved, the most dominant strain of movies are not the spectacularly successful ones, but those that do not fail spectacularly. These movies weather the fortunes dealt by the non-discerning tastes of the majority of Tamil audience, till that inevitable inflection point when the hero is branded as commercially viable. He proceeds to garner recognition and empathy from a sizeable portion of the paying audience, by sheer virtue of the cumulative airtime his onscreen persona is inflicted upon the public psyche. With many actors, directors, and conglomerates turning to the business of making movies, risks of bankruptcy are mitigated through careful business calculations. There is thus a well-established cycle of funding, production, and consumption, that seeds and protects investments, producing more mediocre movies.

Such a well-oiled system of production does not merely discourage risk taking, it can outlast individual creators whose wallets cannot sustain a prolonged battle at the mercy of box office collections.

It is sadly funny that such mass-produced projects are still reviewed and analyzed for their cinematic merits, as if details of artistic decisions can ever overturn a coldly calculated feature triaged into the movie, analytically designed to recoup costs and minimize risks.

Petta falls squarely into this category. It is shallow and adulatory. There are the unreal college campus settings, the wishful masturbatory violence in which an old feeble protagonist sends men flying through the air with a punch, and a romance that is as far removed from the realities of Indian society as possible. Petta makes for a mediocre viewing experience, gives fantastic and simplistic solutions to conflicts and questions that arise within the story, and reinforces the general atmosphere of frenzied cult fan following in the state of Tamil Nadu. As Tamil movies have done for decades now, even the camera sees and shows only carefully constructed set-pieces, non-representative of the general space that Tamil people occupy.

I do not know whose collective failure this inability to go beyond wishful onscreen fantasies is, but that is precisely the gray area in which the Tamil film industry operates. The movie makers conveniently, and arguably rightly, pass the blame to the public—for the lack of depth, originality, and integrity in big budget movie making.

Given the stranglehold mediocrity has over mainstream Tamil movies, the movie makers do not seem to be completely off the mark. Does the trite retort then by them—“we provide 3 hours of fantasy to those who cannot afford them in real life”—assume a pathos that is much closer to the reality of Tamil society than we would care to admit?

To those boys and men who are trapped, sometimes by their own mindset, and sometimes, out of immitigable circumstances, these movies then become the closest experience they’ll ever have of romancing a woman in the open. Complex problems like corruption, women’s safety, and infrastructure woes are solved through fist fights and infantile rhetoric at the end of a movie—a wishful end to a permanent state of disrepair. Maybe, just like a long-persecuted cult who have exhausted their collective wills and mechanisms to introspect and shape solutions to uplift themselves, the Tamil audience fixates on a messianic figure to save them from all evils. In a society where the ruling class has successfully insulated itself from ever being brought to justice, over time, does this unrealistic, and yet unfailingly predictable savior story forget its origin?

Considering there are no other ubiquitous and similar statured platforms on which politics, culture, art, and sensibilities are discussed, movies disproportionately shape and affect the discourses around these subjects, creating a vicious circle of superficial arguments, even as other channels of public debates atrophy.

Tamil movies thus bleed into real life. In the absence of a correcting influence, the Tamil film personality falls prey to the mass delusion that their portrayal of problems and solutions are the most valid exploration of social ills. The Tamil audience, unexposed to the rigors, unavoidable experimentations, constant vigilance, and political and social awareness needed to nurture good leadership, is stifled by the twin stranglehold of dynastic politics and populist cinemas, and selects a paper tiger of its own making.

Even as this drama is re-enacted ad nauseam in the socio-political arena of Tamil Nadu, there has always been a crop of filmmakers who have striven to create and question unpalatable realities within Tamil society through their movies. These movies are invariably made on a small budget. They are either made by creators who are passionate about their art, or by those creators who are financed by bigger movie makers intermittently indulging in these creations to assuage their consciences.

It stands for everything Petta does not. It is rooted in the realities of its people, it raises serious questions and deals with them with sincerity and style. The makers have focused on social truths within the movie with integrity, which reflects the makers’ intent and commitment to an ideal higher than simply making money by appealing to the Tamil movie goers’ baser tastes.

Watching a hard-hitting movie like Merku Thodarchi Malai is like taking a hot water bath on a particularly hot day. The rewards of sensitization, nuance, and intensity in portrayal about the inexorable advent of globalization on rural farmers are negligible to the majority of moviegoers. The small earnings of such movies, no matter how hard the producers argue it is several times the amount spent on the making, reflects the appetite for such movies.

If cinema is one of the best available litmus tests to measure Tamil society’s zeitgeist, does the occasional creation of meaningful movies like Merku Thodarchi Malai indicate the emergence of a more socially and culturally aware society? Or does an already sensitized echo chamber of audience and critics, who are on the watch for such movies, falsely amplify the significance of these movies?

A number of questions arise when trying to understand the influence and impact of these two movies on the Tamil audience.

It would be telling if one could analyze viewership of these two movies. Does watching both the movies invalidate the watching of Merku Thodarchi Malai, because consumption patterns haven’t changed and the viewer is still driven by the warped choices offered? Or, are there enough people actively watching Merku Thodarchi Malai and not Petta, from among the non-urban, paying public? Is there an economically lucrative black hole in the movie market, which hungers for movies with toned down aesthetics and a more balanced sensitivity? Or a segment of the market that can recover a movie starring A-listers but made with a lot more social perception?

There seems to be a palpable divide between those who patronize the commercial movies and those, who with good intentions, only watch social dramas. This non-engagement suits the bigger camp, even as smaller movies find succor in the critical acclaim found in international film circuits and magazines. Also, a failure to repeatedly and innovatively articulate the problems with the state of the movies credibly has resulted in this divide being normalized in literature dealing with Tamil films as well. Lenin Bharathi, Merku Thodarchi Malai’s director, comes from a camp of directors who are making a concerted effort to challenge this divide. Lenin Bharathi’s idea on how he wants to use the visual space he has been allowed to create in is inspiring.

I wanted to watch Merku Thodarchi Malai once more before writing about it, but decided not to, so that I would not be tempted to do a more conventional and formal review of the movie’s technicalities, because in doing so, the scope of comparison with films like Petta would be reduced to meaningless data points like lighting, production values, and sound mixing. Merku Thodarchi Malai does more with less, and can hold its own in such comparisons against mainstream films in these departments. But by performing such a comparison, the beautifully courageous act of making a movie against innumerable opportunistic and mindless movies would inevitably be lost.

Tamil society does not need abusive fans, eager to venerate its leading men. It needs to probe into problems that limit people’s life choices, cutting across classes, castes, and gender; it needs more willpower to tackle difficult questions without a super-hero cult mentality.