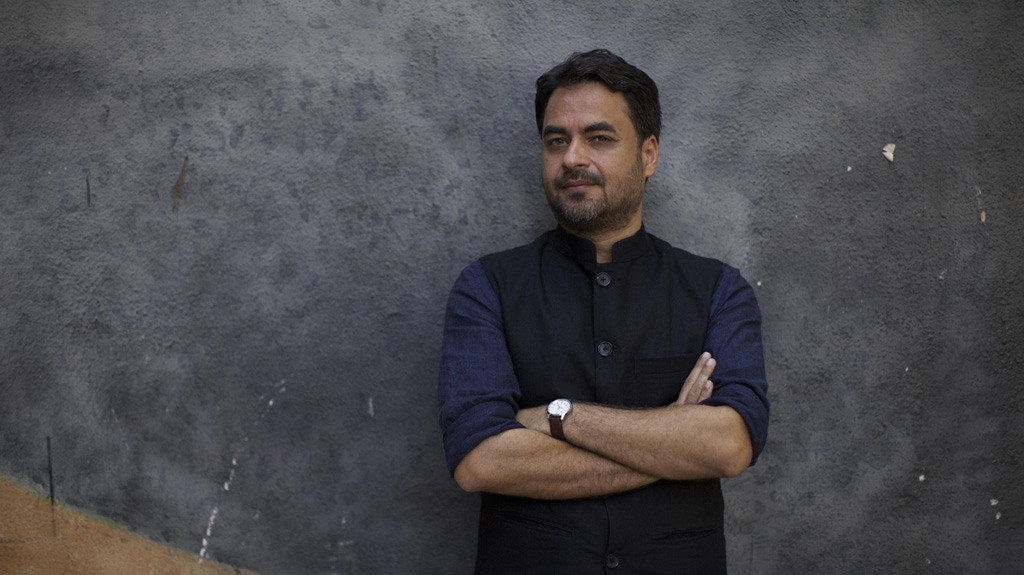 Gurvinder Singh is a National Award winning filmmaker from India. His first two feature films Anhe Ghore Da Daan [Alms for a Blind Horse] and Chauthi Koot [The Fourth Direction] had premieres at Venice and Cannes respectively. He was visiting International Film Festival of Rotterdam in January 2019 to present Sea of Lost Time, as part of the programme Laboratory of Unseen Beauty. You can watch this whole project on Vimeo here.

Gurvinder Singh’s second feature film Chauthi Koot adapts two stories written by Waryam Singh Sandhu, set during the Sikh separatist movement of the 80s. In the first story, The Fourth Direction, two Hindu friends go on an uneasy train journey to Amritsar, sharing a compartment with Sikhs. In the second story, I Am Feeling Fine Now, a family in the countryside suffers brutality at the hands of both militants and the military. While both episodes evoke the fear and paranoia of the general public at the time, the filmmaking, with its precise camera movements and clean-cut editing, is always at a clinical remove. It is as if the filmmaker does not want to be mistaken for having any political or moral agenda. So when Gurvinder Singh gets very vocal about his opinions on the National Awards committee, and the Film and Television Institute of India (FTII), I was left wondering if he is actually alert and angry towards injustice—social or cinematic—and what makes one a political filmmaker.

This is my first question to him, as we sit together after his premiere of Sea of Lost Time, and he decides to go for the difficult questions first. His answer is fast, and crisp like that cold winter day in Rotterdam. “No, I am not a political filmmaker. I think filmmaking and politics can stay completely separate. These controversies you mention exist only because of the circumstances. My tiff with FTII is because they always try to go on a power trip with young, gullible students. When we had Adoor [Gopalakrishnan] or Girish [Karnad], we did not have this problem. This is what you get when you have mediocre people at the top.”

I follow this up by quoting his dig at the National Awards Committee: “Baahubali = Gajendra Chauhan.” The latter was a controversial appointment as Chairman of FTII in 2015, the former, a fun fantasy film that is maybe a little too reliant on Indian myths. He responds, “Baahubali was just Hindutva on steroids. I do not think it is a competent movie, and when you call that the best movie India made in that year, I have a problem. Also this was the year BJP came to power, so it seemed like they were just trying to reinforce their macho, nationalistic ideological leanings. It’s not nice.” Since most of the vocal filmmakers in India run into problems with the infamous Censor Board, I ask him if he ever had to pick a bone with them. He seems very confident of the board’s inability to read through the subtlety in his movies. I concur.

We share a sigh of relief as we move on from the politics of Indian cinema to where he gets his stories from. All three of his films are adapted from literature. His next project will be the first time with his own story. “When I read something, I like to imagine how I can add something to this material with cinema,” he says, when asked about his process of bringing text to screen. “I really enjoy the process of transporting the sensibility from one medium to another.” He does not look for specific writers or books on certain topics, the stories he has adapted so far are ones that have spoken to him on an emotional level. He had not been to Punjab until 2000s, yet he could relate to the volatile 80s when reading Sandhu’s book. He finds he is also able to relate to literature from South America—the exaggerated emotions, the magical realism and the unbelievability of some stories translate very easily to Indian context, he says.

Sea of Lost Time is an amalgamation of the different tropes commonly found in Gabriel García Márquez’s stories. There are dead bodies floating around, wailing women, a soldier with a bleeding heart, a man making cages for birds, another man who shuts himself in his room after having been kicked by a horse—all in disjointed space and time—there’s even a couple that spouts couplets to each other. I should say I could get the ethos he was going for, although the movie may be ineffective as a whole.

We then talk about filmmakers. Some of his cinematic inspirations are Luc Besson, Kenji Mizoguchi, Luis Buñuel. He teaches his students with their movies as material, especially Besson’s, which he thinks are highly academic. He also assisted Mani Kaul for a long time. When asked if he admires or learns from any contemporary filmmaker, he sounds uninterested. “You think you learnt everything from the masters, that’s it?” I jokingly confront. To which he responds, “No, not like that. You can’t learn everything from the masters or books—the craft, yes, but not everything. Most of my learning is from actually being on the sets and making something. I think experience enriches a filmmaker the most.” Would he ever consider himself a part of a school of filmmaking or a film movement of his time? I drop the names of Aditya Vikram Sengupta, Vasan Bala, Anand Gandhi, filmmakers whose works I see a likeness in. “No I don’t really see that. We all work in isolation. It’s the job of a film scholar or a historian to do that.”

What kind of stories does he like to tell? When I notice that all of his stories are set in a specific milieu—that of the poor and the oppressed, he retorts quickly, “Who says the rich are not oppressed?” He is, in fact, telling a story of the rich for his next movie, set in Himachal Pradesh. I mention to him how refreshing it is to see these films telling stories from the outskirts of mainland India, citing Rima Das’s recent works set in Assam. He seems to have an admiration for this contemporary filmmaker, he wishes to see her next work. Another recurring aspect in his movies is that they all have multiple storylines. “I don’t like to tell those intimate stories of two people. I think there is so much in life. The variety of stories around one always interests me.”

Who is he making his films for? “I make them for myself. If you are making a movie for a specific monolith, it doesn’t stand, as people grow up, move on.” He doesn’t really wonder who is watching his movie while he is making it—the festival audience, the mainstream or the critics. “A movie finds its audience by itself. I have heard from people who have seen one of my movies by accident, and then go look for my previous works.” How does he think his recent project will find its audience? “First of all, it’s a ruined movie. Because of all this controversy with the FTII, I had to edit the half-shot footage with my laptop. But I think the nature of the story lends itself to such imperfections. Also, I really like leaving behind ellipsis in my script. I want my audience to work with me. I love giving them that rewarding feeling.” Here is a filmmaker who respects his audience, and that, to me, goes a long way.

Iniyavan Elumalai is a double minority snowflake of the nineties. He dabbles in film analysis, electronic circuit design, and Oxford comma snobbery. Born in India, he now lives in the Netherlands. His social media stash can be found on the gram and now-not-so-fun tumblr.