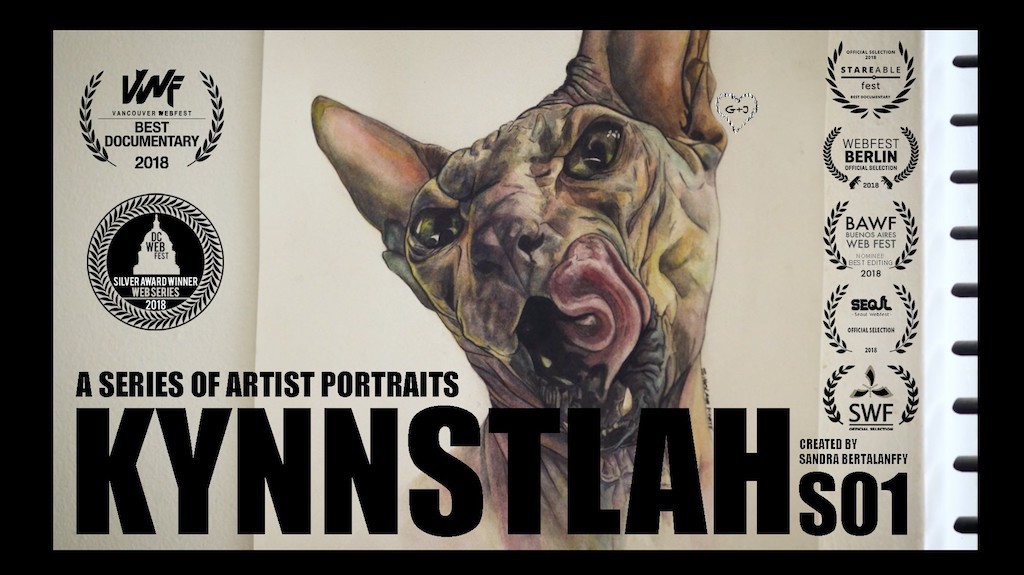 Sandra showed her web-series Kynnstlah at the festival. It is a documentary series about “artists, both visual and performing.” Each artist is portrayed in her/his work environment and interviewed about her/his work. The series aims to capture the act of creation and inspire the audience with the beauty of art.

Martha asked Sandra about her career, which has seen some significant upheavals, her choices, and what she loves about her current line of work.

Scroll down to read the transcript of this short interview.

Martha: Tell me about yourself and what you’re doing at die Seriale.

Sandra: My name is Sandra Bertalanffy and I’m the moderator and host for die Seriale. Also, I do international relations for the festival. And I have my own series called Kynnstlah screening here out of competitions.

Martha: Tell me more about your web-series!

Sandra: Kynnstlah is a documentary series, it portrays different artists—both visual and performing. The episodes are four minutes long, each. And I portray, for an example, an acrylic painter, a watercolor painter, two singers (one classical, another opera), another pop singer… and a poet!

Martha: How did you come up with this idea?

Sandra: I’m interested in exploring other people in general. I had an idea of doing some sort of a profile in my head for a while. And last summer, Joel and I—Joel is the director, editor, cinematographer and co-producer of the show—we started out by talking to Joyce Thornburg, who is an incredible painter in Asheville. From there I thought, “Oh let’s develop this concept of Kynnstlah…and you know, get in touch with more artists.” I reached out to my friends, people around me. That’s how the show happened. I feel like it happened to me, more so than forcing it out of me.

Martha: How has your experience with web-series been before this?

Sandra: Before Kynnstlah, I was involved in Number of Silence—I was cast as a supporting actress. And then, I moved on to being a lead actress in the second season, which is not out yet. Also, I’m co-producing the second season in the States, where I live. I’ve shot scenes in New York, in Austin (Texas). I’m pretty excited for it to come out and to get people to watch that!

Martha: Tell me a bit about your background in the creative arts.

Sandra: I’m originally from Germany (I’m German!), and my background is in business. I was a consultant for a while, before I decided to move to the States to become an actor and work in the arts. I was back in Germany for a while too. Back and forth, I guess. From that acting background, I then decided to be a creator, after being cast in Number of Silence and kind of exploring the web-series world… And that’s where I’m at right now!

Martha: Why did you want to become an actor?

Sandra: I don’t know! (Laughs) Actually, let me remember. When I was in university—I went to university in Mannheim, business school—I saw a play. It was in English, it was Rope I think. And I was asking myself and wondering if I could remember lines and be in a play. So the next year I joined the theatre group, which was in English. And we played Noises Off. I was cast as the character Brooke. Yes, I could remember lines! I don’t know… It just kind of happened. I fell into it, I liked it, I was intrigued by it. And it’s really interesting to jump into the career of acting, in the sense of exploring yourself. And then combining it with business, becoming a producer and all that… Yeah!

Martha: What do you love about web-series as a format?

Sandra: I love digital series because I feel like it’s a really fantastic way to express yourself, whatever you’re feeling strongly about at the moment. It’s pretty easy if you have some means around you—either you have friends who know how to operate a camera, or so on. You can easily get an idea made, and bring it to people. At least that’s my experience. I like the freedom in that. And without being dependent on studios and what not, who want to make bigger movies. I like that. And in the festivals for digital series, what I see is the variety of what everyone brings. The ideas are so refreshing. So awesome. Yay for digital series!

Martha Sigargök-Martin was born in France in 1981 and moved to Germany 17 years ago. She studied History and German Linguistics in Göttingen, Rostock, and Hamburg. In addition to her career in cultural institutions, translation, media, and translation services, she followed her passion for storytelling through books, films, and series. She founded marthasfestivalcorner.com in 2016, a future Video-on-Demand-Platform to livestream the program of film festivals. To accompany this project, she created the blog marthasfilmcorner.com, where she writes about topics she is passionate about.

Video produced by Martha, and first published on her blog. Republished with permission.

Read about Martha’s favourite shows from this edition of the festival here.