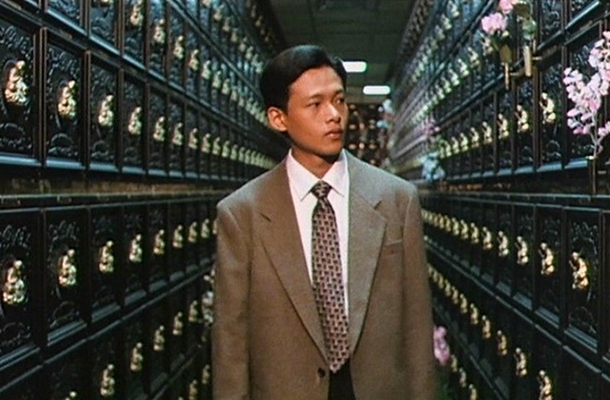 Poet’s note: The poem Blueprint is inspired by the film Vive L’Amour, which remains a personal favourite.

Amazing how it takes the smallest things, like a bus ride,
to transport you to the important issues, such as death
and all its different manifestations. Approaching 7pm,
shadows are already climbing out of the sky to put out
the skyscrapers like candles, ink a river under the highway
to black opacity. You wonder about the years you have

emptied into your present job, the sameness of expression
with which your wife greets you in the evenings, sullen
face of your son at the dinner table, the taste of food
reduced to blandness on your tongue, while the television
in the hall blares forth winners of another game show.

You gaze out the bus window at the moon’s half-grin
and remember that film your colleagues hated, which
wounded you in some deep, unspeakable way, like
the scene when the male lead hesitated for more than
what was only a minute before pushing a knife’s edge

against the taut curve of his wrist, with that sharply
held breath before every attempt, its quivering release
upon failure. This process you are so familiar with,
each hesitation recurring to a lullaby of the same,
these repetitions the invisible blueprint of a life. Stars

perforate the sky, like the eyes of dead people
suspended outside of time peering in, the place where
your soul must have come from, yanked down by ropes
of pure longing. You wonder at the history of mankind,

calculating the sum total of your consequence in relation
to its yet interminable drama. Quickly, you drift on
to happier subjects, like your son, who pointed one day
at clouds rising into houses, pillars, collapsible cities.
You wonder what you were like at that age. In school,

a teacher commented that you had a talent for stories,
a startling gift for description. You recollect the praises
scribbled in blue across the bottom of a report card
that dad signed, then handed back to you without a word
of compliment. You tell yourself you are better towards
your own son: more tender, more inclined to praise.

None of you can account for the exact moment when
that cynicism flew into his face to lock itself in.
You attribute rudeness to his friends, your wife blames
you for spoiling him from the very beginning. You
glare helplessly at desert maps of your palms, at the
paperweights of whitened knuckles pinning you down

to the world. A poet said that all of us are searching
ultimately for our graves. You think about graves, how
your wife was a hole in the ground you crawled into
and remained for so long you forgot what love was.
You complain to yourself about how this bus is taking
too long to bring you home. The road stretches out

like your father on his bed the morning he did not wake.
He looked no different, and religion made you believe
another sort of wakefulness was prepared for him. You
stood there observing him, dwelling upon decomposition,
how the air would dissolve his body, reclaim the space
it once occupied. You glimpse at your watch, this gift

from your son for Father’s Day you found out was really
bought by your wife; this watch that never slows down
for the ecstatic instant, but for boredom’s uniformity.
Last week, you went grocery shopping with your family

at the supermarket around your block, and discovered
you had lost your wallet, or maybe dropped it somewhere
between the vegetables and the dairy section. You heard,
on the intercom, the voice of the one who had found it,

a girl mispronouncing your name again and again. And
you left your wife, your son by the trolley, both turning
to strangers with their unison expression of puzzlement
and mild irritation. You hurried down aisle after aisle,
so eager to retrieve the little you could have lost,

realizing instead you were unable to find the counter.
You kept walking and walking alongside rows and rows
of shampoo bottles pasted with women’s faces cracked
wide open by smiles and that barely audible laughter.

You became convinced there was no counter. That bitch
repeated again what was once your name. You halted,
much to the approval of tin cans of baby powder, images
of babies so cute you could smash a fist into every tin.

Fluorescent lights swelled inside your head to blossom
into a panic: at once unbearable, yet oddly calming,
as you never felt so close to alive, so potentially free.

Who knew we’d like the same movie,
Lost in Translation? You brought the DVD
(which, in the end, we never watched together)
to the hotel room, along with cigarettes,
tidbits, and other paraphernalia
to heighten our play; barely stuffing
the holes of silences that widened
the closer we got to realising we had
little in common. Yet when we played,
the way you touched and not touched,
kissed and not kissed, like a child
who had entered fire and was terrified
to meet it again, a light
flickered within me like inside a dark room.
When things didn’t work out between us,
the last moment from the movie
unreeled in my mind, when Bill Murray
embraces Scarlett Johansson in a crowd before
they’re forced to part, whispering in her ear
words the audience cannot hear; I wanted
so badly to know what he said I could cry.

I Didn’t Expect to Write About Sex

Did you know that after I came, I imagined my pelvis had emptied out
into a dark cave you could crawl into, lay yourself down and fill my body
with your sleep? This isn’t really about sex, is it? Yet I could write
about your tongue, how cleverly you rotated it like a key to slip
open every lock of resistance under my skin, muscles loosening
like a hundred doors creeping open across the conservative,
suburban town of this flesh, desire stepping into the open like Meryl
Streep in that film with Clint Eastwood, a wind calling forth the stiff body
from under her dress so wholeheartedly how could she not help but
undress, welcome it in. I could also write about your hands, tenacious
dogs of your fingertips unearthing pleasure from every pore, jumpstarting
nipples with the flick of your nails, each time you pushed in deeper
from behind. I must not forget to write how much I love you when you
warn me not to swallow; I love how I take you anyway into my mouth
like tugging a recalcitrant child back into the house, even though he
realizes deep inside himself that he would always long for home;
I love how you taste, what was inside of you now inside of me, sliding down
my throat like the sweetest secret. I could write about how when you fell
off the peak of your mounting hunger, your hands stayed anchored
upon my nape, as if to keep from drowning, as if to let me know,
“Even when I’m this far gone, I’d want you here. I’d want you with me.”

Cyril Wong is a Singapore Literature Prize-winning poet and occasional fictionist, as well as a vocal artist who has performed at the Seoul Fringe Festival and the Hong Kong Fringe Club. His poems have appeared in anthologies by W. W. Norton and Everyman’s Library and in journals and magazines including Atlanta Review, Poetry New Zealand, Transnational Literature and Ambit. More about him can be learnt at cyrilwong.wordpress.com.

Carolyn A. Schroeder is an attorney, artist, photographer, writer, traveler, explorer and student of life. Originally from the Chicago area where she practiced law for 25 years, Carolyn now calls Hilton Head Island home, where she has enmeshed herself in the creative arts full-time. Carolyn received her B.F.A. from the School of the Art Institute of Chicago; and her J.D. from Northern Illinois University. Some of her work can be found here.

The artist’s work may not be reproduced without permission.