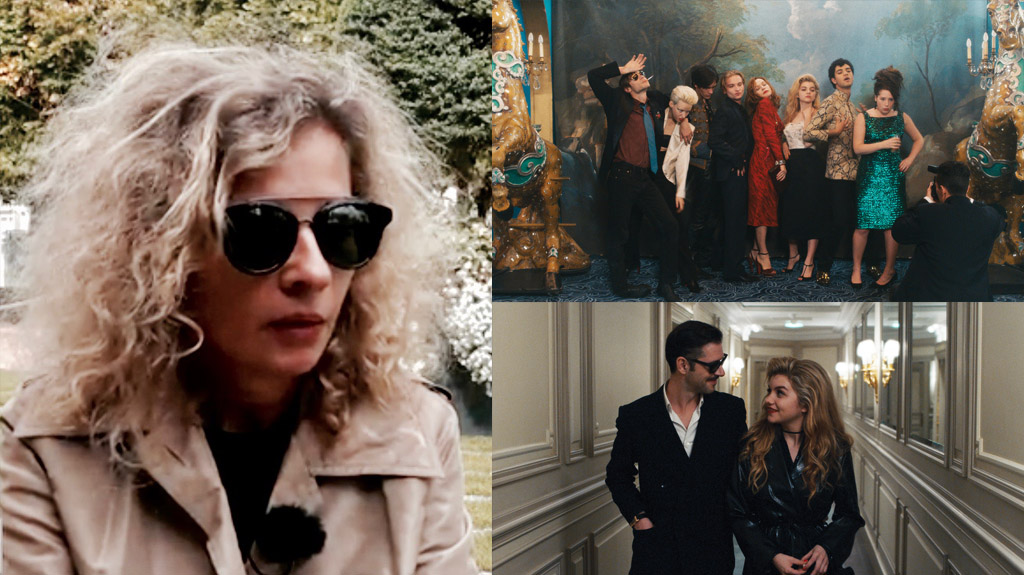 Eva Ionesco is a French actor and filmmaker. Her acting debut was in Roman Polanski’s The Tenant. Her directorial debut My Little Princess starring Isabelle Huppert premiered in Cannes to critical acclaim. Eva Ionesco was in Rotterdam with her follow-up film Une jeunesee dorée (A Golden Youth), also starring Huppert.

“One winter’s evening in 1979, somewhere in Paris, I came across a 13-year-old ‘woman’ who already had a terrible reputation,” writes Simon Liberati of his first encounter with Eva Ionesco, who he is currently married to. The reputation he mentions probably comes from the fact that Irina Ionesco, the famous French-Romanian photographer took suggestive, nude pictures of her own daughter Eva, or the fact that Eva was already a wild young thing partying in the famously decadent halls of Le Palace. We might never know, as Eva’s first semi-autobiographical movie My Little Princess ends with a twelve-year old Violetta (her fictional stand-in) caught in a legal custody battle between her mother and her grandmother. The follow-up Une jeunesee dorée begins with her (this time, named after another flower, Rose) at seventeen years of age, dipping her toes in the club scene of Paris in the pre-AIDS era.

Eva and Simon were both present waiting, as I went running to our appointment, giddy from the early morning coffee, and nervous about interviewing a seemingly intimidating woman who speaks only French. With a very welcoming smile, she takes me to a table with a translator. She is interested in my Indian origin, mentioning how well her first movie was received at an Indian film festival. Calmed by her genial aura, I present my first question: What kind of story is she telling in this movie? A young couple Rose and Michel (played by Galatea Bellugi and Eva’s son Lukas Ionesco) meets a rich old couple Lucille and Hubert (played by Isabelle Huppert and Melvil Poupaud) that frequents the club scene. Infatuated with one another, they all become very close. Rose and Michel move to the old couple’s château, where they drink, smoke cigarettes and opium, have sex, never sleep, and get married to one another. This foursome becomes toxic and unwatchable as the film progresses, despite the fabulousness around everything that happens.

Is it a cautionary fairy-tale? “Yes, it’s a conte de fée. The old malefic couple are witches, and the young couple come to them as fugitives. They could even be siblings as they do look like each other.” Despite my puzzled look, she goes on, “This partying old couple also could be vampires of the night. There are many such children’s story elements we can find here.” I notice that these characters are sometimes literally dressed in sheep’s and wolves’ fur. She remarks that this is more of a nod to Dangerous Liaisons, a movie that both she and Simon (he co-wrote this movie) love. Is it a coming-of-age tale for Rose, who is the only character with a redemption arc? “Yes, this is a rite of passage for her. When she pushes Michel to make more mistakes, he also evolves. They both lose their innocence, and become adults.” Most of all, it’s her personal story, with some cinematic licenses. She had a fiance just like Michel, though she assures they never slept with other people. There is also a defence for these characters’ promiscuity: “They are not prostituting to buy themselves a new Gucci. They are doing it because they want to be protégés, they want to learn from these adults.”

Where does she think they lose their innocence—is it with all the partying at Le Palace (the costumes, the music and the camera work are all phenomenal here) or is it with the older couple at the château? “It happens over time. First, Michel’s friends (Alain-Fabien Delon, among others) make him believe that he needs to have sex with Lucille to become a successful artist. They are little men who themselves are so enamored by this cougar, but don’t have the courage to reach her. Later on, Lucille herself kisses Michel in front of Rose to make it seem like they might have already done something. It’s all a facade. It’s a strange game everyone around them is playing, at the cost of their innocence.”

From dwelling on the specifics of the story, I move on to ask her if the movie has a feminist element to it. She doesn’t think this movie is particularly feminist, or regressive. She does acknowledge that the actions of the two female characters are mostly enabling the lives of the men, but then these are two man-children incapable of evolving on their own. At one point in the movie, Rose says, “I want to remove two of my ribs, to be able to fit into a corset.” I ask her if a woman going to such lengths to suit the beauty ideals possibly set by men is regressive. But she thinks it’s nothing to do with men, it’s just about her wanting to look beautiful. They even remade the same corset that was worn by Brigitte Bardot for that scene. When asked about how the sex scenes with the old man and Rose would be perceived in Hollywood, what with the MeToo movement in full force, she thinks it would be prudish to make a fuss about that. That scene was just about these characters: a gigolo and a lolita. “There are many men out there just like him. Why can’t we represent them? Also he is not a bad guy. He has dark humor in him. And a lot of whisky.”

She directs three kinds of actors in this movie: the stalwarts Huppert and Poupaud, the young actors, and her own son. I pose my last question to her: if she has a different directing approach with each of them. “I direct all the young people together. We work a lot before the actual shoot. Just like in a theater, we work with props and improvise a lot. We also watch a lot of movies together, and discuss about their characters. Isabelle will come just for the shoot, put on her clothes, and just finish the whole thing.” As a big fan of Isabelle, I was all smiles on hearing this. I ask to take a picture with her at the end, but she says her skin is not the best today, and refuses.