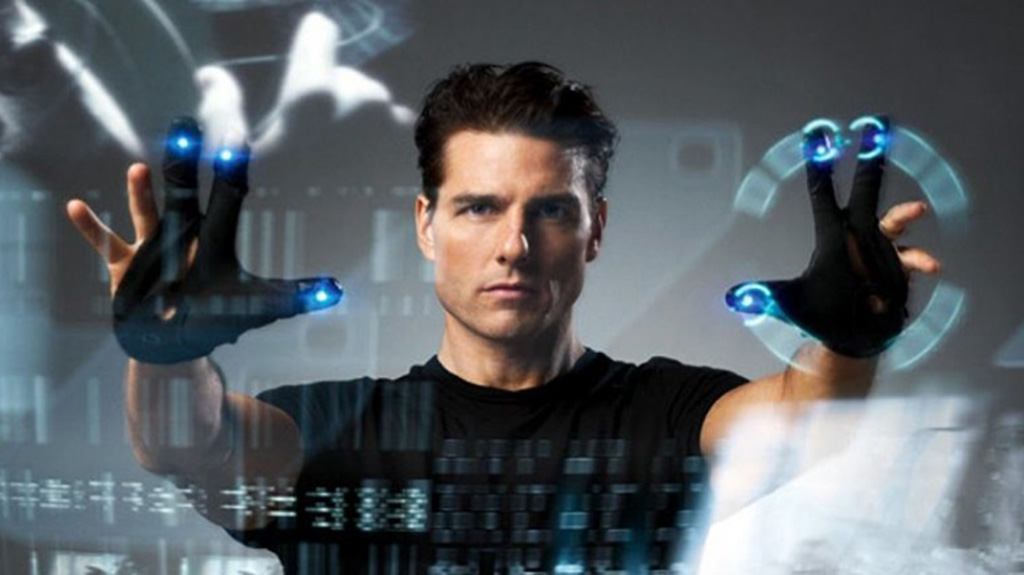 Three Precogs can tell a crime before it happens. If all three agree, it will happen. But what if they don’t? In Minority Report, one of them casts a dissenting vote. Therefore, the system cannot be perfect. And with such a debatable issue like foreseeing the future, no society can embody it. At least for now…

“Who is guilty without having done anything yet?”

“What about the 0.02 percent who change their mind and do not do something after all?”

These questions form the theme of Minority Report. How do Visual Effects help the theme and message of this film? Do they help at all? In other words, does using Digital Visual Effects undermine the storytelling or help it move forward? I certainly think it is the latter.

How does one design the world as we know it, almost half a century into the future? Writer and researcher Shilo T. McClean argues that “In narrative filmmaking the development of DVFx arises out of narrative demands.”

In Minority Report, architecture varies. Classical Greek motifs, on one hand, signify the beauty and status of the city.

On the other hand, futuristic monuments and edifices that surround the aforementioned buildings add scope—providing innovative, imaginable technological ideas.

Last but not least, there are the dark and wet alleys which denote that some things will never change even if they are polished with holographic advertisements.

Dana Friedman and Mat Beck, ILM Visual Effects Producers, once commented that the tools are not the main point, just “pipelines to our imaginations,” and that the best images are “lyrically and emotionally real.”

The contradiction between current and futuristic elements is emphasized by Producer Bonnie Curtis who says, “The opening scene is somewhere in Georgetown and while everything looks ordinary, we enter ‘The Temple’ which looks like a whole different world.”

So, are the DVFx in the first act necessary? Andre Bazin is in favor of the Visual Effects and states that a script can be weak by itself, it doesn’t need the DVFx to ruin it. He sees the opening scene as “…A total cinema that is to provide that complete illusion of life which is still a long way away.”

People often accuse Visual Effects of ruining the storytelling, that they are more important than the actual film or that they are impressive and the story is lost. Shilo T. McClean, as Bazin mentioned earlier, references the reasons that a script can be lacklustre with or without DVFx: poor structure, massive changes to fundamental plot details in the adaptation from an original source, poor premises and reliance upon spectacle as a substitute for action, character development and thematic resonance.

In Minority Report, we have an exceedingly strong plot without the futuristic elements: powerful, relatable characters, edge-of-your-seat action sequences, intricate riddles, nail-biting suspense, and tension already built into the setup.

“Because it is a science fiction film and a science fiction film is based on future facts mostly,” Januz Kaminski, the Director of Photography says. He adds, “Steven Spielberg makes us imagine facts from the past, the present and the future and decided to depict a science fiction noir film where there is a lot of story, mystery, and clues, and requires attention in order to put everything together”. And to top it all off, Spielberg approached Kaminski telling him that he wants “the ugliest, dirtiest movie” either of them had ever made.

DVFx are added to the already existing characteristics only to “transfer” us to the future. Helicopters without propellers, sonic oscillator weapons, flying police officers, cars that are made by themselves within two minutes, cameras that can read your eyes from two hundred yards, and holograms—these are not just baseless predictions or random speculations.

Three years prior to starting filming, Steven Spielberg gathered the producers, the art director, and the visual effects supervisor along with a sixteen-member future experts team consisting of scientists, philosophers, and historians. The reason? To think about and design buildings, machines, cars, advertisements, and equipment as it could potentially be in the year 2054.

Minority Report is a science fiction/action/thriller, so everything counts—from the believability of the story to the believability of DVFx. Anderton (played by Tom Cruise) is hunted down for something he hasn’t done yet, that is, he becomes the victim of the system he so passionately supported for years. DVFx just add to this premise!

Scott Frankel, Compositing Supervisor of ILM, talks about the alley chase, describing it as one of the central sequences of the film. He mentions how they “extended” the height of the buildings or how walls were added and skies were replaced so that no wire is visible. The camera makes the four-storied building look like a twelve-storied one. Numerous “Photographic elements shot in the Blue Screen” were added “in post” so the hover pack flames look real in motion, like “Genuine Hot Exhaust.”

Author Albert J. LaValley stresses on how “Special Effects have to be more narratively integrated and convincing representations of a realistic fictional world here for the audience to believe in them sufficiently and so to engage with the resulting dilemmas posed for the film’s characters.”

Machines have been created that easily violate private lives, and no one can do anything about it. As the spiders look for Anderton, they invade people’s lives who just stop doing whatever they are doing and wait for the spiders to identify them, taking it as a matter of course.

Spielberg said, “George Orwell’s prophecy really comes true not in the 20th but in the 21st century. Big Brother already watches and that little privacy we have now will be completely evaporated within twenty or thirty years, because technology will be able to see through walls, through rooftops, into the very privacy of our personal lives, into the sanctuary of our families, and these violations will be a detriment of society.”

We see these often in Minority Report. Here is the interesting thing about them: their construction. Very heart-warming is the moment when Anderton loads the holograms of his wife and son. Barry Armour, ILM Computer Graphics Supervisor, claims that they wanted them to look “semi-amateurish” from the viewer’s point of view, but perfect from Anderton’s.

Steve Braggs, ILM Sequence Supervisor, talks about how these holograms’ motion was achieved, and why they used the “Image Based Modeling and Rendering.” They wanted a “rough shape” in their projections; to be “realistic yet not photo-real.” Rob Legato, the VFX Supervisor in Titanic stated once that visual effects should be used as a tool for the storytelling process and if the result looks real, the audience will accept it despite knowing it isn’t. I guess people we love will always seem perfect to us whether real or not.

Alexander Laurant, ILM Art Director, says that they used traditional media like physical models, apart from the 3D effects. The idea was to make them look like they are made of cement and steel. The Maglevs sequence where Anderton is pursued by the police is completely shot using blue screen, but to get it right, they used basic Animatics in order to see how the traffic would flow. Tom Cruise was framed against the blue screen jumping to and hanging from one of the car replicas which were then replaced by “computer generated vehicles.”

They were made and painted to the detail in the studio. Dana Friedman says that they looked exactly the same as they appear on the screen except, of course, they couldn’t fly.

So CGI is not everything, is it? Piers Bizony, a science journalist, once quoted: “One of the greatest misconceptions about modern films is that visual effects are generated by computers. Nothing could be further from the truth. Human inventiveness is the most important ingredient and it always will be.”

Steven Spielberg wanted the Precogs to see everything in a circular manner, as the human eye sees circles and not squares. To make these visions look like the thoughts we have in our head, a team called “Imaginary Forces” was recruited to animate them, so that they didn’t look static.

This brings us back to the storytelling. It didn’t matter how much the VFX for the Precogs’ thoughts was going to cost. The number one priority was, is it going to look real? Will people believe? John Dykstra, one of the Star Wars VFX Supervisor, once stated that someone has to be adaptable to the storytelling no matter how sophisticated their equipment is.

No effects! The third act of Minority Report has no DVFx. Why? No need! Justice has been served and everyone got what they deserved (?). No fancy equipment, no need for impressions, not an end that someone would expect from “a cinema of attractions” film. Voiceover and photographic lens is what the story needs to move from here on.

Andre Bazin stated that “Only a photographic lens can give us the kind of image of the object that is capable of satisfying the deep need man has to substitute for it something more than a mere approximation, a kind of decal or transfer. The photographic image is the object itself, the object freed from the conditions of time and space that govern it.”

Later on in his book, he comes back to this point and emphasizes on the mesmerizing effects the photographic lens can have on the screen, and that it doesn’t undermine the reality of the image, but on the contrary, justifies it.

Minority Report expresses lots of ideas, beliefs and debates. It is a matter of time until we see holograms on the streets, or encounter a situation in which our eyes are scanned and read from a long distance. More and more moral issues will be raised in the future, leaving the previous ones unanswered, especially the one that is debated from the birth of politics to this very day. How much government do we want… How much government do we need? The Future Of Policing Using Pre-Crime Technology, published in 2018 by Forbes, may shed some light regarding the current status of predictive policing.

I would like to leave you with a quote by Sid Ganis (former president of The Academy of Motion Picture Arts and Sciences), that I believe represents the relationship between VFx and storytelling. “With all the magical technological advances that have brought films where they are today, everything we do on film is the most human of arts, and it’s the art of storytelling. In every culture all around the world, storytelling is how people connect with one another. State-of-the-art technology will change, but state-of-the-heart storytelling will always be the same.”

[5] La Valley, A. (1985), “Traditions of Trickery: The Role of Special Effects in the Science Fiction Film”, Southern Illinois University Press.