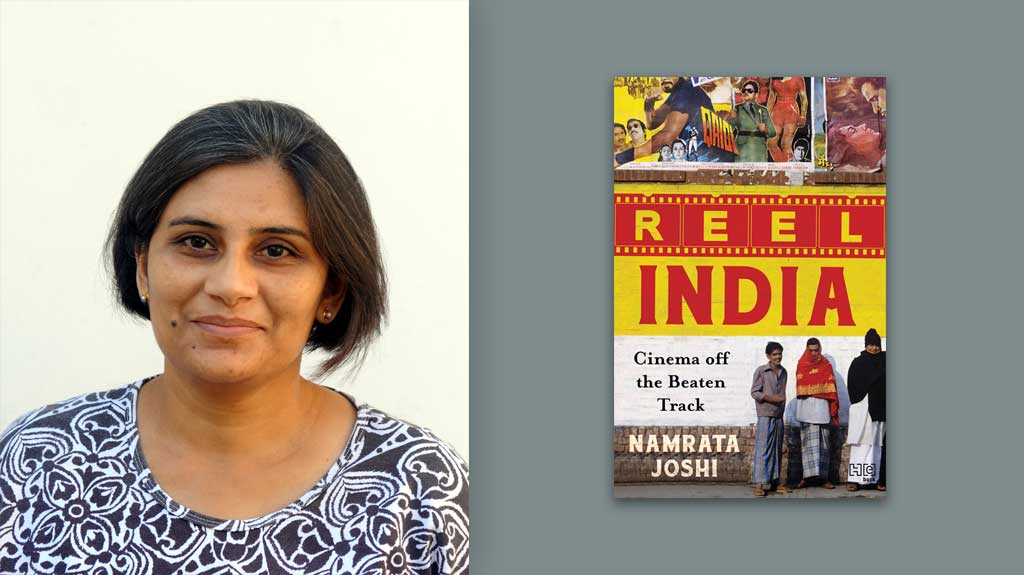 Namrata Joshi is an independent journalist, a film critic, and author of the book Reel India: Cinema Off the Beaten Track. In this collection of essays, Namrata journeys through the interiors of India intimately chronicling little-known accounts about the nation’s obsession with the movies. We spoke to her about the journeys that resulted in this book, how she thinks India engages with cinema, and more.

Reading the book, it is evident that you wanted to focus on stories and people that the Indian national media doesn’t pay attention to. Even when you write about mainstream cinema, it is about the unique ways in which people engage with it (like the copycat film industry that has mushroomed in Malegaon, or the individuals who go to unexpected lengths to document film trivia). Was there a particular incident that set you off in this direction? How did the idea for this book come about?

I suppose you could call it serendipity. My senior colleague Anjali Puri was doing a cover story for Outlook on how deeply Bollywood had seeped into our day to day life—impacting everything, right from the language we spoke in, to how we organised weddings. I was asked to travel to Saharanpur, a small town near Delhi, and spend a couple of days there to write an accompanying piece on how Bollywood plays out at the grassroots level, away from the metros. Udayan Mitra (now at Harper Collins but back then at Penguin) saw the piece and sent me an email saying there was potential for a book there. That set things rolling!

However, looking back, I have to thank not just that one article, but my long innings and the work culture at Outlook for this book. Despite cinema being my beat, I got to work on a wide range of offbeat features, which allowed me to travel to places near and far, and gain an understanding of several issues first-hand. I became interested in offbeat cinema stories along the way; I suppose I grew a nose for them over a period of time. I have kept seeking out these stories, even as they have kept coming my way. After a while it just becomes part of your practice and daily grind. And that helps things take a bigger form eventually.

How did you plan the journeys for your research? How did you decide on which regions to visit and what kind of film culture to focus on?

It was a proper list-making exercise! I had already spotted some stories while travelling for other assignments. A few that were written cursorily needed to be expanded. Some others came my way—a small paragraph buried inside newspapers that I had to pursue. Then there was the vast network of friends, colleagues, professional contacts to tap into.

The fulcrum of this exercise was meeting ordinary people and going to places that don’t quite fall on the cinema map, yet have a deep connection to cinema. There was no specific film culture I wanted to be led by. I wanted to be democratic, within the purview of interesting people and compelling places of course.

Was there anything that surprised you during the process of research and writing? Did you find your perceptions of small town India or the pervasiveness of cinema being challenged? If yes, how?

What surprised me was the amount of good food I got to eat! And the sheer variety of it. City slickers think they have access to the best of culinary delights, but the real feast is the local cuisine. I was fortunate enough to discover some new favourites—from jigarthanda in Madurai to egg benjo in Indore. The trips have proven to be a fertile ground for some food writing to emerge in the future.

On a more serious note, the travels were a confirmation of something I have always felt, that the real change in India is happening in the small towns. They are the most dynamic spaces, swinging between the traditional and the aspirational, between conservative and progressive. That’s where the real stories are, not in the cities. And I am talking beyond cinema stories here.

Also, surprisingly, television is more central to people’s lives here than films. Cinema is a larger than life passion. It is still looked up to, but the day to day engagement with images is through TV. The television is ushering in a revolution by bringing the world to people’s living rooms, like radio used to once upon a time. It provides them with news, views, fuels their dreams, ambitions, and desires. Maybe if I were to travel again now, I might see people stuck to their mobile phones, consuming digital content by the hour.

You have written about films for leading publications like The Outlook and The Hindu. What do you think newspapers and magazines with a national circulation can do differently, with regard to the way they cover cinema?

Most mainstream spaces cover cinema in isolation, primarily as entertainment. More serious publications look at films as an art form only. There is also the trap of either addressing the fans, or becoming the voice of the film industry itself. The publications I have been with have been immensely liberating in the sense that they haven’t made any effort to straight-jacket cinema; they let their writers approach films in diverse ways.

For instance, I regard myself as a journalist first, rather than a cinema writer or a film critic. I like to see cinema in tandem with life, society, economics, politics, culture, food, travel, and not just an aesthetic construct or a medium of entertainment alone. For me, stories behind the screen are as compelling as those unfolding on it. These stories make cinema far more alive, dynamic, and responsive for me. Call it a selfish concern but I’d like to see more of that in the media! I’d like cinema to be covered with a 360-degree view. I wish to see it being taken as a serious beat, as important as politics, business, health, foreign affairs. It should be out there more consistently as front-page news, and not for controversial matters alone.

In what ways do you think cinema can empower people from marginalised communities or people without a political voice in India?

One obvious way is for films to engage more consistently with stories of the disempowered, to become their voice. For years, we have spoken about how Malegaon has been creating its own variety of spoof cinema, despite the costs involved, with just sheer ingenuity. It has given its people a breather from deprivation, it has provided a creative outlet for them to deal with their existential woes. Now, with technology becoming cheaper and hence more accessible, the Malegaon model has been gaining ground. Anyone can potentially become a cameraperson, a journalist, or a filmmaker. We can see the subaltern’s aesthetic prominently in Tik Tok, for instance. It is entertainment of the people, by the people, for the people. People tell stories they want to tell, in the way they want to be seen.

In Bhopal, an entire feature film, Turup, was made through the efforts of a collective of blue-collar workers. No single individual is credited as director for that film. In Orissa and Jharkhand, activists and NGOs have been conducting filmmaking workshops for tribal populations, so that they can wield the camera and talk directly about the issues affecting them, showcasing their own voices instead of being the subject of someone else’s work. This marks a critical new phase in the democratisation of cinema wherein the medium becomes a tool for the disempowered and enables them to be proactive in the fight for their rights.

How has the reception to your book been so far? Would you like to share with us any memorable feedback that you received?

What readers have appreciated is the range of stories, as well as the fact that these stories are unique and often not written about. They’ve told me they didn’t know such people or worlds existed, or that cinema was being made in such diverse cultures and languages across India. Some readers felt the documentation was both necessary and timely.

All images belong to Namrata Joshi. They may not be reproduced.