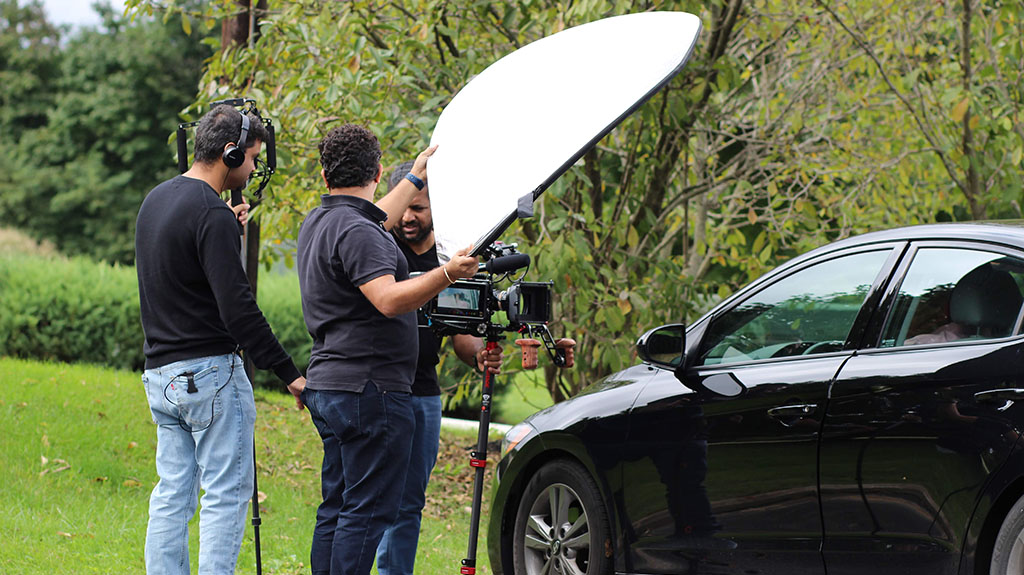 We are on vacation when it first begins. The imminent calls.

In San Diego, we walk to the shore after catching a few waves. Hair still wet, hands still clammy, my husband joins a conference call on his phone. Words such as rig, camera and angle get tossed into the air. I ride away from the onslaught of movie jargon, on my electric scooter.

That night, at the airport, and on the flight back home to Philadelphia, he is busy arranging and rearranging tables on an Excel File. Forehead creased, he jabs at the keys on his laptop. Several pages of scheduling complete with the list of locations to film, costumes of lead actors, and the script, stare back at us from his monitor.

The next morning, he is out by 7 am, and returns like a war-torn hero, well after midnight.

“Too small a team, too much work, and just figuring out the logistics, the costumes, makeup…it’s a lot,” his voice trails off. Isn’t movie making supposed to be fun, haven’t we seen enough bloopers to know that, I wonder. I decide to go with him the next day.

“Wear your shoes, not the heels, you might get sunburns,” he says, while tying his shoelace. “Really, it happened to someone yesterday,” he affirms, when I look at him puzzled.

My husband is part of the filming crew of a Marathi movie called DNA. Directed by Delaware-based Ashay Javadekar, the movie explores the journey of a couple who are faced with the trauma of not being able to have a kid. Their life turns upside down when circumstances demand they take care of a toddler for a brief time.

Over the past four months, the core crew has had hours-long discussions about the venue, costume, camera angles, and actors’ availability. For the first leg (out of three) of the production in Pennsylvania, the cinematographer and the lead actress have flown in from California, and the rest of the team has traveled from Virginia, North Carolina and New Jersey.

We reach the shooting spot: Shamona Creek Park, Pennsylvania. There is no one except the filming crew. The cinematographer stands as still as a Paul Cezanne painting, holding the over-thirty pound camera steady on his shoulder. Next to him is the director, who is looking at a separate monitor that plays the camera output through Bluetooth. There are two others, who are ruffling a tome of pages pinned to a writing board, with a sense of urgency. I feel like an interloper.

“Everyone looks busy,” I whisper to my husband, who is also busy logging in the scene number, shot number, the video recording number, and a few other details.

“Action!” screams the director. The camera rolls, it’s a wide angle shot. The female lead walks slowly to a point, where she holds a railing, gazes reflectively at a far point, and turns back. “Cut!” the director says. “We need to take it again, I am not happy with this,” he remarks. And like back-to-back deja vus, everything repeats again. And again.

Until the cinematographer has a eureka moment. He suggests they show leaves flutter (“but out of focus”) in the foreground. The assistant camera person is sent to scout for a twig with leaves. He brings it back, and holds it like an umbrella over the camera. “A little up…no down…not that down,” the cinematographer shouts. Tempers flare. After about 40 minutes, the few-seconds scene is okayed.

In the hours that follow, the cameras are fixed using rigs to the front of the car, above the bonnet, and to the side of the car, near the side mirror. The team is running behind schedule, I realize from their expressions. I sit with the production manager, who, with furrowed brows, keeps looking at her watch. “I will make sure that all the scenes are done today,” she resolves, before walking to the rest of the crew to get an update.

At some point, the director excuses himself to find a remote spot in the park and shouts his lungs out. If he were a pressure cooker, that was the whistle. The action, which rattles me, is treated with insouciance by the rest. I see the actors touching up their make up and a couple of them discuss “what to get for lunch?”

As we open boxes of Chipotle rice and salad, the next shots are animatedly talked about. 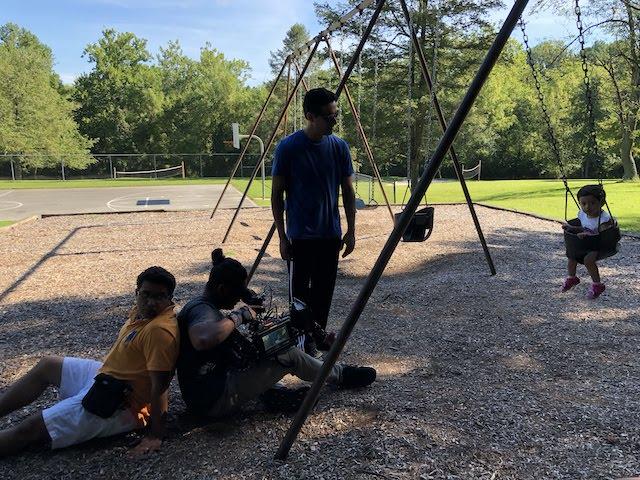 Soon, we gather for the next scene. “One teardrop. Just one,” shouts the director. Meanwhile, I am given a vial to mix equal part glycerin and equal part water. I do it with a chemist’s focus, and by the time I take it back, the actor’s left eye is patched with a black tape, with just enough space for a plastic tube to run underneath it. The director then injects a drop of the mix into the tube, which comes out as a lone tear drop. It looks like a science experiment demo. Many passersby turn back to find out what the fuss is all about. Seeing a patched eye, they leave without a word.

Just when we pat our backs at getting the teardrop, the director says he wants the shot while the actor is on the move, driving.

A plan: The actor has to mindlessly follow the car in front of him, around a loop, and concentrate on looking sad and miserable. So a group of us sit in the car that leads the actor’s car. The cinematographer settles right next to the actor in the shotgun. It takes close to 10 loops, almost 30 minutes, to get this three-second shot.

By the end of it, I twitch to leave. I part with the team even as another scene is in the making. In the rear-view mirror, I see the cinematographer and actor make another loop, and step a little harder on the accelerator.

The experience is half-forgotten until I reach home, put on my jammies, and hit the remote to start watching a movie. It’s not just a bunch of moving images anymore. It is hours of schlepping the camera from one spot to another, the laughs in between every take, the director’s loud shouts in the park, the coming together of creative ideas, arguments, discussions, calls, all-nighters. And someone’s one-day experience.

DNA is scheduled to release in April.

Images belong to the author. They may not be reproduced without permission.