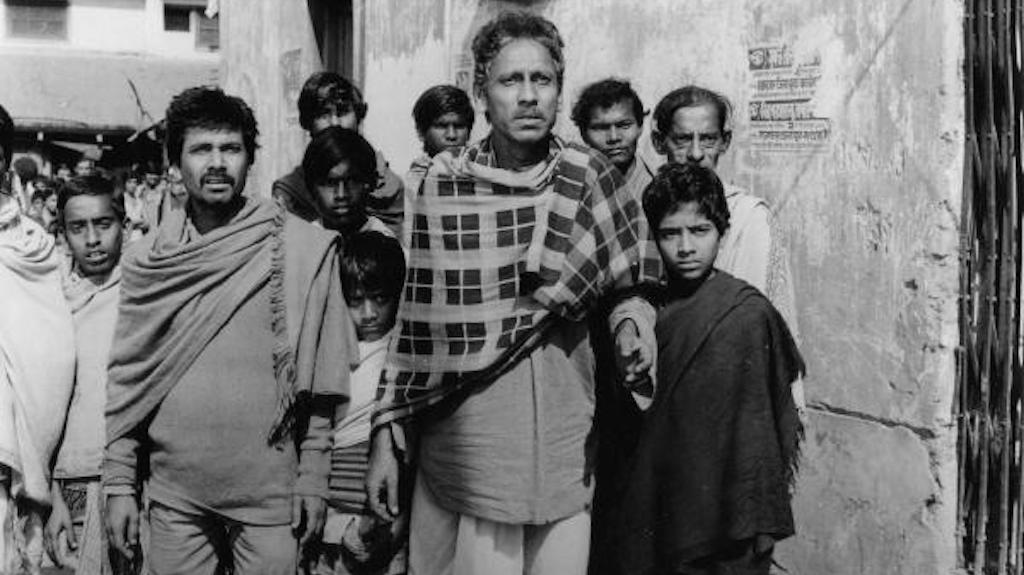 Anjan (Anjan Dutt) and Mamata (Mamata Shankar) lead a comfortable middle-class life in the Kolkata of the 1970s. They have a young son and they are in need of a live-in servant. When an impoverished man from the hinterland arrives with his young son Palan, roughly the same age as the child, Mamata is very happy. She bargains about his salary with the poor father, knowing fully well that one mouth less to feed is what the arrangement is all about. The boy is given a space to sleep in the kitchen. One morning, the family wakes up to find that Palan is dead of carbon monoxide poisoning from the coal oven in the tiny, closed kitchen. With these precise events, Mrinal Sen quickly sets up the first act of his searing film Kharij [The Case is Closed], allowing us to observe a bourgeois Bengali family survive a crisis created by their insensitive, selfish and callous attitude.

The couple depicted here is certainly educated, their own child goes to an English-medium school, wearing a clip-on tie, while they have absolutely no qualms about hiring another child of similar age to be their live-in servant. As the couple struggle to extricate themselves from the police investigation that starts as a result of the unnatural death, Mrinal Sen plays with the tension between husband and wife, as they both wrestle with the implications of what has happened. The couple blame each other. Mamata is perhaps more conflicted because she created and administered the gigantic divide between her child and the servant. Anjan tries to blame her but does not find himself occupying the moral high ground, from which to question her effectively. Both of them are not bad people, they would not harm anybody wilfully. But when it comes to living comfortably in a very imperfect society, they do not want to get their hands dirty. They are merely part of an ancient system that is struggling with modernity.

The film uses the bed in which the family of three sleeps in an interesting way. Towards the beginning, Mamata is making the bed joyously, leaning over and almost falling as she tucks in the bed sheet in a corner away from her. We see the family sleeping under a plush quilt in the winter night. Towards the end, we see her struggling to pull out a padded mat from under the same thick mattress, so that a bed can be made for Palan’s father in the living room. I found myself thinking of a very similar family unit from Satyajit Ray’s Agantuk. In that film too, Ray probed beneath the genteel lives of an upper middle class household, to expose shocking hypocrisy and insecurity.

The family decides to consult a lawyer, and this character is perhaps the voice of the director. He questions Anjan precisely and makes him uncomfortable about his double standards. He innocently asks “Did Palan ever get sick?” to which Anjan replies that Palan made them suffer once. The implication is that Anjan’s family suffered from inconvenience when the boy fell ill. The lawyer cross checks, “Made you suffer?!” Anjan corrects himself and says Palan suffered once due to illness. This little exchange is enough to illuminate the mindset of a selfish employer. There are many moments like this in the film, till the police formally closes the investigation. The case could easily have been one of manslaughter. It is closed conveniently as that of an accidental death.

The film derives its power by building a stifling atmosphere, choking us slowly like the carbon monoxide. Temperatures don’t boil over—it’s a little bit like the experiment of boiling a frog in water, the poor creature never realises what is happening and does not jump out. Kharij has been called a highly constructed film, and indeed Mrinal Sen’s script and treatment are like a crime procedural. Every element of the story is meticulously examined and taken care of, with a moral and ethical question every step of the way. This is not a film that buries its message deep inside a story. We are part of the proceedings and have to wrestle with our conscience at every step.

I think there will be a dichotomy of responses between a western audience and an Indian/ Asian/ third world audience when they watch Kharij. Due to our overwhelming income divide and equally large population, we have become desensitized to the value to human life. There will be many who will understand, if not empathise, with the “nuisance value” of a dead servant on their premises.

The screenplay is studded with sharp dialogues which show that the class divide hardwired into the bhadralok, as they swing between being enlightened and liberal, and being feudal. This phenomenon is unique to the modern Bengali milieu, struggling with being the children of the Bengal renaissance which laid the foundation of modern Indian society, and being the inheritors of the post-colonial Brown Sahib syndrome. Take for example the scene in which Anjan motions to Palan’s father to sit down for a discussion. He is offering the man a stool to sit on, while he and his influential neighbour sit on the sofa. This is a huge concession, made hesitatingly, awkwardly, and is a calculated gesture when he has much to fear from the father. And when Palan’s father weeps, he does not reach for the knees of the gentleman positioned next to him, but hugs the door. Even in his darkest moment of grief, the poor father never forgets his place in society.

In an earlier scene, we see Anjan bring in a group of loutish men, colloquially referred to as chengras, into his house. These men would have been kept at a distance, acknowledged on the street with a measured nod. Anjan is trying to curry favour with a section of society that is usually kept at bay, as any sensitive situation demands that the “local brothers” are on your side. Later, when he has to allow Palan’s father into his house, he creates a space for him to sleep in the living room. It becomes amply clear to the audience that the same arrangement could easily have been made for Palan, effectively saving his life.

The first time I watched the film, one aspect jumped out at me: the art direction by Nitish Roy. At that time, I was working with Dr. Girish Kasaravalli on his seminal Kurmavatara (2011), and we were struggling to create the perfect lower middle class home with a reputed art director from Bangalore. Kharij captivated me with its details of the house where the film is set, as well as other locations. Art direction is one of the more under-appreciated aspects of filmmaking; and Kharij illustrates how art direction can elevate the cinematic material.

The film ends on an anticlimactic note: the audience expected the dead child’s father to slap Anjan, but instead he just folds his hands in a gesture of formal goodbye, and departs without a word. This drove the audience mad with anger when the film was released, but Mrinal Sen resolutely refused to provide them the catharsis they longed for. He said in an interview that “We all got the slap, there was no need to show it.” This is his signature: when the film ends, the action begins in the minds of the audience.

How does life continue after the case is closed? Does the family hire another child servant? What does Palan’s father do? Does he send his other children to work in the city? Do they enter even more hazardous vocations like working in an illegal factory, or worse, a mine? The answer to all these questions is probably yes. This is still a reality in India more than thirty years after the film was made. The case against hypocrisy of the Indian middle class is far from closed.

Amit Agarwal is a filmmaker, curator, and speaker based in Singapore. He pursues film evangelism at mostlycinema.com. He serves as the Artistic Director of the Singapore South Asian International Film Festival, and is pioneering a unique image-literacy program for children.