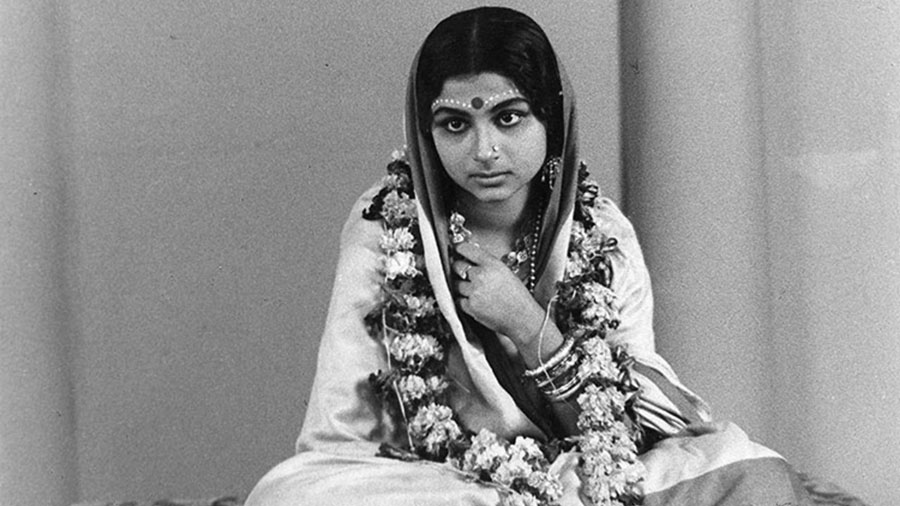 The history of civilizations shows us that, since the first incidence of patriarchy, women embodied different forms and representations. From Eve’s submission, Virgin Mary’s benevolence to the European witches threatening transgression, there remains the myth of the eternal feminine principle – the Universal Force of Love and Death, the Divine Mother and Protector in whom men have their origin and end. Devi [The Goddess], by Indian cineaste Satyajit Ray, dialogues with that eternal and ethereal feminine mystery, providing us a symbolic, crude, and subtle portrait of a woman’s condition under the bonds of religious obsession.

Satyajit Ray imbued his art with universal truth. Among humanistic concerns present in his films, we see the depiction of social inequalities that prevail in his country, and the claim for women’s freedom. Such characteristics consecrated him as the greatest Indian filmmaker and one of the most important in the history of cinema in the 20th century. Released in 1960, The Goddess belongs to Satyajit Ray’s first cycle of films, marked by the completion of the Apu Trilogy (1955-1959) and The Music Room (1958). In this initial period, Ray celebrates the human spirit, imbuing his tragedies in optimism and poetry. The Goddess is, however, his most gloomy film. 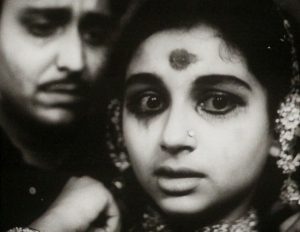 In 19th century rural Bengal, we follow a 16 year-old girl Dayamoyee, from the moment her husband Umaprasad surprises her with his decision to go to the capital to finish his studies. (Here we see again the chemistry between actors Sharmila Tagore and Soumitra Chatterjee, the lovely couple from The World of Apu.) The young couple’s life is made joyous by the presence of their nephew Khoka, the only son of Umaprasad’s sister, Harasundaya (played by Karuna Banerjee, Apu’s long-suffering mother in The Song of the Road and The Unvanquished). Umaprasad’s idealistic character – representation of modern youth, keen to be free from old values – is juxtaposed with the conservatism and moral rigidity of his father, Kalikinkar (Chhabi Biswas, from The Music Room), a rich landowner, who is a devotee of the Goddess Kali, and who nurtures a great admiration for his virtuous, demure daughter-in-law. 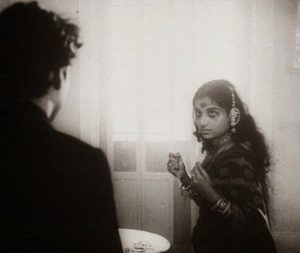 One night, though, the peace of the home is disturbed when old Kalikinkar has a dream in which he believes it has been revealed to him that his daughter-in-law Daya is actually the incarnation of Devi – Kali Ma, the Mother Goddess. In this sequence, in which surrealistic elements take centre stage, Daya’s face emerges from the statue of Kali. Kalikinkar awakes, teary-eyed, and falls at Daya’s knees. The innocent, fragile teenager is taken to an altar in the opulent house, where she is, worshipped by the local community from then on.

Umaprasad returns home and finds out about the ritual that is being performed around his wife. Skeptical, he tries to dissuade his father from such an idea and convince him that to get carried away by dreams is insanity. That is when, before their eyes, a miracle occurs: a dying boy is taken to Daya’s feet and mysteriously healed. News of this event spreads, and soon, starving, sick peasants come from faraway regions, moving towards the altar to receive the Goddess’ blessing and being healed.

The Cult of the Eternal Feminine 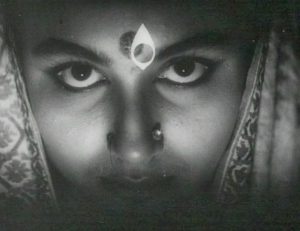 To Western audiences, not too familiar with ritualistic Hindu elements, several symbols that permeate Satyajit Ray’s work may pass unnoticed. The mystical content is only understood in its totality if we comprehend the real meaning of the cult of the Goddess established in many Eastern societies since ancient times: Kali is the most mysterious Indian deity, and represents the three aspects of cosmic act – creation, preservation and annihilation. She is the Lady of Time, the Dark Mother, associated with death and sexuality1.

In all civilizations, ancient and modern, feminine archetypes remain and permeate religious thought – in Christian mythology, Eve, the first woman, was conceived from Adam’s rib in order to satisfy him and take away his loneliness; in artistic production – the virgin of Romantic literature, and the femme fatale from the silver screens with her predatory nature and nails resembling feline claws; life as we see in our societies – woman holds the divine gift of motherhood and there lies her path. 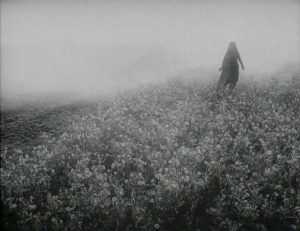 In her book The Second Sex, French philosopher Simone de Beauvoir talks about the construction of the feminine myth and how this is the ancestral foundation of patriarchal societies: “Man finds shining stars and the moody moon, sunlight, and the darkness of caves on woman; wildflowers from hedgerows and the garden’s proud rose are also woman. Nymphs, dryads, mermaids, water sprites, and fairies haunt the countryside, the woods, lakes, seas, and moors. This animism is profoundly anchored in men. […] Man expects more from possessing woman than the satisfaction of an instinct; she is the special object through which he subjugates Nature2.” 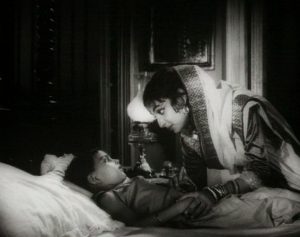 Dehumanized and with no voice before the power of patriarchy, Daya surrenders to horror and insanity – woman or Goddess? – and hesitates to run away with her husband, believing that such an act will catalyze dangerous consequences for their future. Meanwhile, a tragedy awaits them: Khoka, their beloved nephew, falls ill. The family despises medical care for they believe “the good Goddess will heal him.” Khoka is taken to Daya, whose inner turmoil pushes her to plead for mercy from the supreme forces. However, the boy dies in her arms. Accused of witchcraft, Daya is persecuted. The final scene, which marks the last encounter of Umaprasad and his innocent wife, is dreamlike: unkempt, with smudgy eyes, Daya emerges from a white light. “They’ll kill me,” she says. Delirious, she runs away through flower fields, towards a destiny that has been preordained for her.

The screenplay of The Goddess is based on the namesake short story by Prabhat Kumar Mukhopadhyay. First published in 1899, it is said to have been inspired by real life, from an incident that occurred in a rural community of Bengal in the 1790s3. Under Satyajit Ray’s eyes, the fable turns into a fierce criticism of psychological manipulation exerted by religion over society. Despite the many attempts by traditionalists to boycott the movie at the time of its release, The Goddess received the National Film Award for Best Feature Film in Bengali and competed for the Golden Palm at Cannes Film Festival in 1962.

An assiduous observer of his people’s customs, Ray declared himself an agnostic: “I stopped going to Brahmo Samaj4, around the age of fourteen or fifteen,” in an interview to Cineaste magazine in 1982. “I don’t believe in organized religion anyway. Religion can only be on a personal level5.”

Beautiful, tragic, puzzling, The Goddess, almost 60 years later, still arouses haunting reflections. It is art in its essence and magnitude; woman in her evocation and strength; life unveiled in its universality; cruelty and compassion. It is Satyajit Ray’s humanity that makes this an eternal piece of cinema.