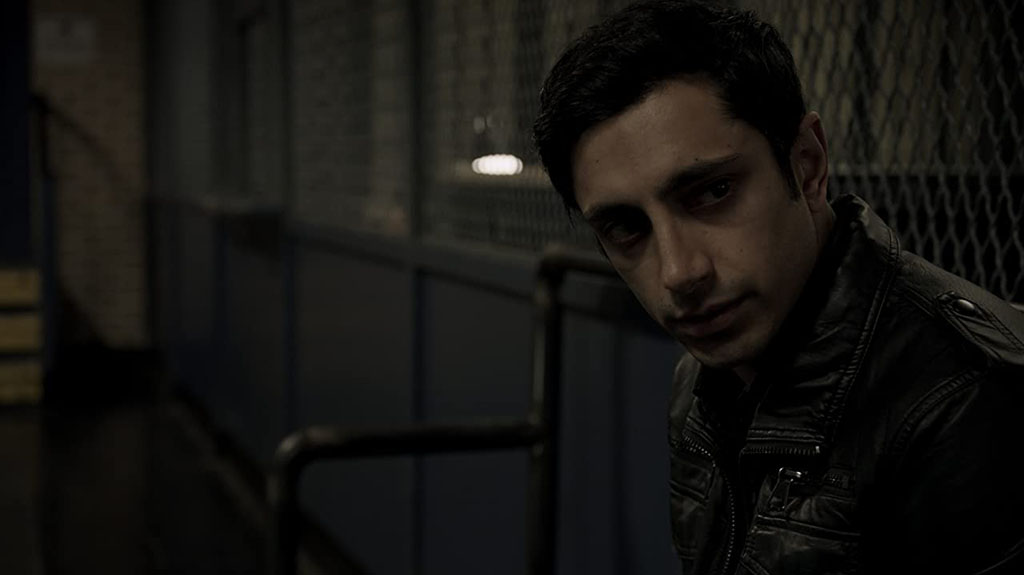 What is real? According to the Cambridge dictionary, “existing in fact and not imaginary.” Therefore, one could argue that cinema or TV is not real, but realistic: “seeming to exist or be happening in fact.” The aim of this article is not linguistics, and most definitely not an in-depth, intricate, eye-bleeding Lacanian psychoanalytic approach on how to perceive what you watch and why. These are never-ending academic debates that don’t mean much outside academia. But replace the art with science, and you can, to a certain extent, convolute the cinematic experience.

In this article, I plan to, very briefly (I promise) combine the absolute basics with my experience of watching the HBO/BBC joint project, The Night Of (2016). Minor spoilers are included, but I will leave certain details out. I will not reveal the ending too. My goal is, mostly, to emphasise on the first episode, what it achieves, and how it goes about doing it. If you have watched the show, I may offer you a different perspective, and, if you haven’t, I hope to prepare you for yet another existential HBO achievement. Get comfy… 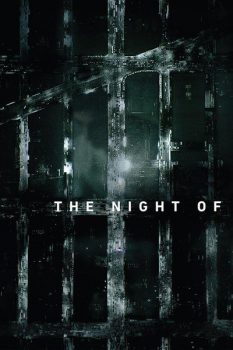 Logline: After spending a debaucherous night with a woman he had never met, a young man wakes up finding her stabbed to death, and charged with murder.

The Beach is, arguably, one of the most intense first episodes in a series or miniseries. It offers a slow-burn. It is also one of the biggest investments in both character and story development, and I would consider it a masterclass in the narrative/editing relationship. What we get to know about Nasir, how people perceive him, the way he wants to be perceived by his peers, especially women, are all parts of him that need to be carefully developed before the inciting incident takes place. And after the alleged establishment of who he is, it all happens! The girl he instantly falls for and cares about is stabbed to death. Nasir loses it. Everything he can do wrong, he does. Ultimately though, he gets caught accidentally, for some other wrong he did. All this wrongdoing creates so many questions in the audience’s mind, and places them in Nasir’s shoes. This is the realism I was referring to earlier. What happened? What would I have done? How is he going to prove he is not guilty? As we grapple with these questions, Detective Dennis Box and Nasir’s future lawyer John Stone are also introduced.

For anyone who is not familiar, I’d like to introduce a couple of terms from Warren Buckland.

Everything you know so far, or think you know, comes through Nasir’s eyes. As much as you would like to know about what is going on, you don’t. What you do get to know very well though, is what is happening in Nasir’s head, and the editor is solely responsible for that. Before I go into it, always keep in mind that every sequence you watch on the screen consists of carefully selected and trimmed shots, picked from numerous reels of that very sequence, filmed in numerous ways, numerous times. Even though the following is merely one example, it encapsulates the meaning that editing creates, and how that particular meaning builds up the suspense while moving the story forward, patiently and cautiously.

After being caught for something minor and while waiting at the police station, Nasir realises that this is his last chance to sneak out (yet another wrong decision). Not a single word is said, yet through the extremely effective editing, the audience can read his thoughts. 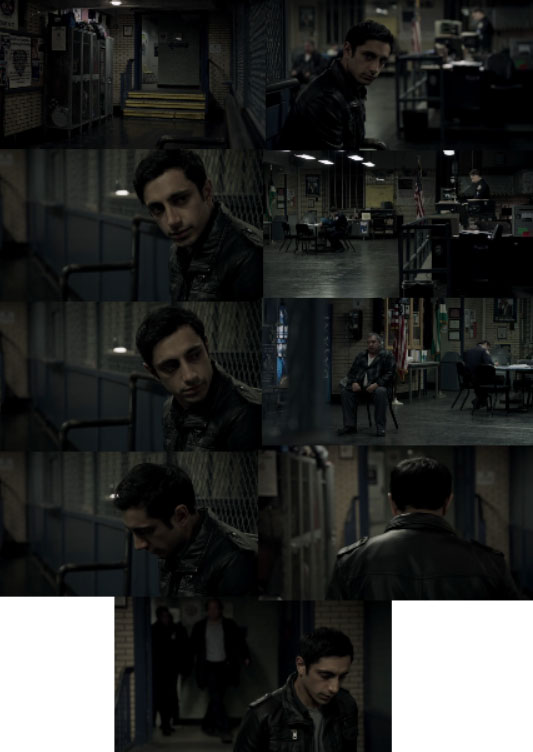 Nothing needs to be said because everything has been shown. The pace and rhythm that define the suspenseful build-up ultimately pays off, creating the perfect cliffhanger and preparing the audience for the wait. Before he gets caught with incriminating evidence, a series of casual events take place, after which, the audience realises that now it is too late for Nasir to do anything. Buckland would say that any sequence that does not directly contribute to the conflict’s resolution is a Delay of Resolution.

If it wasn’t for these delays, any film or series would be significantly shorter, and the audience would potentially get answers the moment they wanted them. Fortunately, not getting what we want when we want it is part of this cinematic experience that mirrors life itself. Naturally, this excludes people who always get what they want!

The Night Of is more than just a brilliant first episode though. Everything that takes place lays the foundation for the subsequent episodes to build on: the legalities, the charges, the transport, the detention. Through the eyes of a young man who has never experienced anything like it, you, the audience, get to live the nightmare with him. You watch every step of the process, and it is excruciating. To make matters worse, as if that were possible, you become omniscient and get to experience his parents’ pain too.

And so we come to the Paradigmatic Narration, where each segment introduces a new story, location or character(s). The series seems to change directions, becoming more of a case study: What will happen to you if you end up in jail? Two other questions come up as well: If he hasn’t done it, who has? And, how will his innocence be proved? The narrative remains focussed, with the subplots functioning to support the main plot, thereby advancing the story. We witness Nasir’s metamorphosis, until only one question remains with us. Is he actually innocent?

As I mentioned in the beginning, my goal is to bring your attention to this miniseries, to the various techniques it uses to tell a story, and to its realism. Here is what I mean when I say realism.

The term realism comes from a literary and art movement of the nineteenth century which went against the grand tradition of classical idealism and sought to portray ‘life as it really was’. […] Film as cinema makes absence presence, it puts reality up on to the screen. It purports to give a ‘truthful’ view of the ‘real world’ through the presentation it provides of the characters and their environment. […] There are, arguably, two types of realism with regard to film. First, seamless realism, whose ideological function is to disguise the illusion of realism. Second, aesthetically motivated realism, which attempts to use the camera in a non-manipulative fashion and considers the purpose of realism in its ability to convey a reading of reality, or several readings even.

Andre Bazin claims that the arguments surrounding realism derive from a misunderstanding, a bewilderment between these two types: the aesthetic (aesthetically motivated) and the psychological (seamless). He refers to the former as true realism: “the need that is to give significant expression to the world both concretely and its essence,” and the latter as “pseudorealism of a deception aimed at fooling the eye (or for that matter the mind); a pseudorealism content in other words with illusory appearances.”

Film theory has no immediate applications to the average viewer, who simply wants to enjoy a film or a series. Personally, regardless of how much I have worked in or studied film, I try to live the moment when I watch something.

The Night Of felt like a ‘based-on-a-true-story’ to me. Think about what happened to the suspects, their motives, how they act. Do you like them? Does it matter? Was your mind already made up? Are you more confused? Such narratives mean to deceive you, and editing is the best tool to achieve this deception. Every whodunit is meant to be misleading, and the right combination of narratives intend to engage you while purposefully misleading you, but not insulting you with lies. I find the difference between withholding the truth and lying intriguing.

I would like to make a few more observations. The Night Of is presented as a dramatised documentary on how the American legal system works. The people’s apathy, the system on autopilot mode, the lawyers and their rivalries—all of it comes together to ruin a man’s life. What I found very interesting is the police officers’ attitude towards crime and criminals. At first, it comes across as indifference, which is somewhat annoying, but give it some time, and the truth that emerges is much worse—it is a habit. There is nothing they have not seen.

Detective Box is called as a witness in court and the lawyer tries to corner him:

Chandra: I am not saying that you consciously thought about it. I am wondering if, maybe, it was subconscious. If you were having doubts about his guilt from the beginning.

Detective Box: Well, if one could describe what goes on in their subconscious mind, then it wouldn’t be subconscious, would it? So, there is no way for us to know. Unless, you got Freud out there waiting to be called.

HBO productions, among other things, have always paid attention to character development, and dialogue has been a big part of it. Every series they have produced has numerous lines that leave you in wonder. The Sopranos (1999), The Wire (2002), The Leftovers (2014), True Detective (2014), Westworld (2016), Big Little Lies (2017), Sharp Objects (2018), Chernobyl (2019), The Outsider (2020)—all these are excellent primers on how to make a series, how to start, develop, and finish the story in a way that will not only meet the audience’s expectations, but exceed them by far.

I would like to add that the realism or narrative techniques that I discussed would not be effective at all, if the acting was weak. Riz Ahmed, John Torturro, Bill Camp, Payman Maadi, Poorna Jagannathan, Amara Karan, Jeannie Berlin, Paul Sparks, and Michael Kenneth Williams give solid performances, leaving you no choice but to empathise with them, love them, loathe them, truly feel for their suffering. It is a shame that the late James Gandolfini passed a month after putting on the producer’s hat, never getting to see how brilliant his project ended up being.

Maybe, one day, I will write about why Hollywood keeps casting British actors to portray Americans, when the reverse happens very rarely. What are the criteria behind casting specific actors in specific roles?

To conclude, I am not here to dictate to you how to interpret films and series, but I would like to give away signs that will help you in your interpretation, and encourage you to see for yourselves how a captivating narrative can stimulate you and make you question everything you thought you knew. The Night Of articulates the story, evoking certain feelings that you might find confusing. Upon watching it though, I swear that you will have understood how the cogs of life work.

Konstantinos got into TV and Film production immediately after school. He has been studying and working in this field ever since. In 2011, he won the Nostimon Imar Award (Best Greek Director Abroad) for his short film Ithaca that he wrote, edited and directed. The following year, he donated his documentary Asperger Syndrome: Myths & Reality to the National Autistic Society in the U.K. Konstantinos lives and works in the U.K. as a freelance Video Editor and Camera Operator for corporate videos, fashion shows, and documentaries. He is currently pursuing a PhD in Film at the University of Nottingham and reviewing films on his own blog. He has a podcast on horror films too!