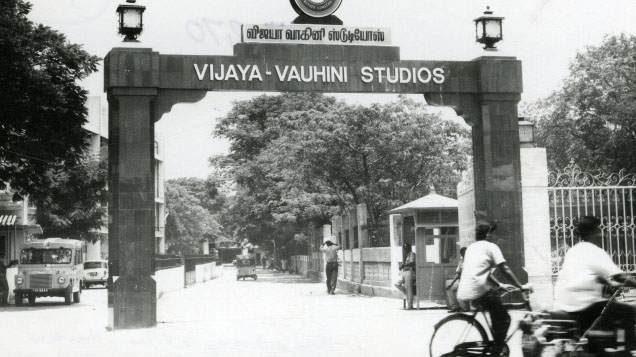 Most hero-centric movies in Tamil cinema have at their core a mythical quality, their stories are retellings of epics. According to the moral codes governing our lives, in spite of the many hardships that ‘good’ people encounter, and the many ways that ‘bad’ people antagonize them, we like to think the virtuous do somehow win at the end. Myths and stories have echoed this over and over again. As an extension of the tradition, the heroes of Tamil cinema feature in their many movies as those who fight against evil and restore justice.

But in reality, people continue to live in a state of near desolation. For a long time now, the world has belonged to the strong, the meek are rarely victorious. The happy family -as often shown in Tamil cinema, singing songs together and being festive- is not a reality for most. The truth is much less glamorous, with people spending most of their lives struggling through their problems. This is where Tamil literature plays an important role – it records these lives that Tamil cinema neglects. Following the wave of existentialism, many literary avenues brought forth books that spoke about the everyday lives of ordinary people. In the company of these novels, we find Ashokamitran’s Karaindha Nizhalgal, a novel about the plight of those who work on the peripheries of the film industry.

Instead of focussing on a few characters, as is the norm, Ashokamitran succinctly presents to us the experiences of many. The scenes at the beginning of the novel take us to a film studio, as it is being prepared for a shoot. Here, we are shown how important the role of a manager used to be at the time, through the Natarajan character. On the one hand, managers like him do not receive much in the way of recognition. On the other, even as they handle large sums of money, they hardly see any of it for themselves; they continue to live in poverty.

Following this, in the next chapter, we see what happens when the movie’s heroine Jayachandrika does not show up for work. Natarajan exhibits significant charisma and control in that studio and the novel shows us how Jayachandrika’s behaviour reduces him to ruins. After much of the film has been shot, when nearing the end of the schedule, she refuses to act in the remaining scenes that are few minutes long at most. The film is stalled. Natarajan and many others like him lose their jobs, without a way out of their situation. Actors refusing to cooperate with producers, and delaying the filming; this continues to be the state of affairs in Tamil cinema.

The novel then moves onto the life of Rajagopalan, who is the movie’s assistant director. He is employed now, and looking for a job, spending most of his time at home, when he receives a visitor. In his conversation with this visitor, we see how the society denigrates someone who does not follow the herd, who tries to live a life chasing one’s dreams and passion for the arts.

For instance, the visitor asks Rajagopalan, “Why don’t you work in some company like your brother?”

In attempt to manage the situation, Rajagopalan answers, “I am trying my best.”

Even then, the visitor doesn’t want to let go. “You must be thirty four years old now? Let’s see, it’s going to be difficult for you.”

In the scenes where Rajagopalan meets his friends from the film industry, the reader gets a sense of the temporary nature of such jobs. Also, in the portions where he goes in search of his friends, we find vivid depictions of the Chennai of those times. Specifically, the way he says he’s going to Madras, when he travels from Kodambakkam to Royapettah1, was surprising to me, as a resident of present day Chennai.

In the next chapter, the novel jumps to Vinayaga Film Studio, owned by a certain Rama Iyengar. When a room in this studio is opened to stack cement bags, we come across some files, reels, even a clapboard; all belonging to an old film. We find these are the remnants of the film that Jayachandrika abandoned long ago.

As someone successful in both Tamil and Hindi film industries, does Rama Iyengar at least have some peace of mind? Fundamentalists in Bombay protest; how can someone from Tamil Nadu release movies in Bombay, they demand to know. Rama Iyengar is trapped. Fifty years have gone by, since this novel was written. Religious extremism, caste violence, intolerance for other languages; these attitudes continue to make their presence felt.

Sampath is the only character in this novel who succeeds as a direct result of his talent and skill. But the last few pages of the novel drive home the point that the success isn’t permanent. Sampath goes in search of his erstwhile manager Natarajan, and expresses much distress over the latter’s wretched situation. In a way, Natarajan and Sampath are more similar than we think. As the story begins, we think of Natarajan as the one with power, and as the story concludes, we place Sampath in that spot. But it doesn’t escape us that Natarajan’s (mis)fortunes may visit Sampath too. It is an insightful comment about the illusion that is cinema.

When we think of cinema, we immediately think of actors, directors, music directors, and the like. Vellithirai [Silver Screen] is one of the few Tamil films that talks about the film industry. In addition to this, it focuses on the lives of actors and directors. Let us for a minute go back to the mythical quality mentioned earlier in this essay. Vellithirai follows a similar structure as well. In the movie, we see a man who faces numerous setbacks. He is humiliated, and betrayed by those around him. But he emerges victorious, due to his efforts and talent. The film’s narrative never loses sight of this end. The hero of the movie is an ordinary man who aims to become a director. An actor betrays him. A kind producer helps him out. An actress falls in love with him. The movie always circles back to telling the stories of those in power. It rarely places a spotlight on the others, the workers who make the magic of cinema possible.

However, the novel Karaindha Nizhalgal takes care to introduce us to and sympathize with the workers who populate the lowest rungs of the film industry: the manager, the group dancers, the assistant directors, the drivers. Also, we see how the mistakes of the powerful few affect the lives of many, especially but not restricted to the lives of people we’ve come to know. In doing this, the novel wears its communist ideology on its sleeve. The water scarcity that plagued the city, the scramble to juggle household expenses on an intermittent income, the politics of the time – we get to know all of this and much more, both from the reading the story and reading into the story. Karaindha Nizhalgal succeeds in painting a vivid picture of the minutiae of everyday life.

[1] Kodambakkam and Royapettah are localities in the city of Chennai. Kodambakkam has a high concentration of film studios and is a Tamil film industry hub.