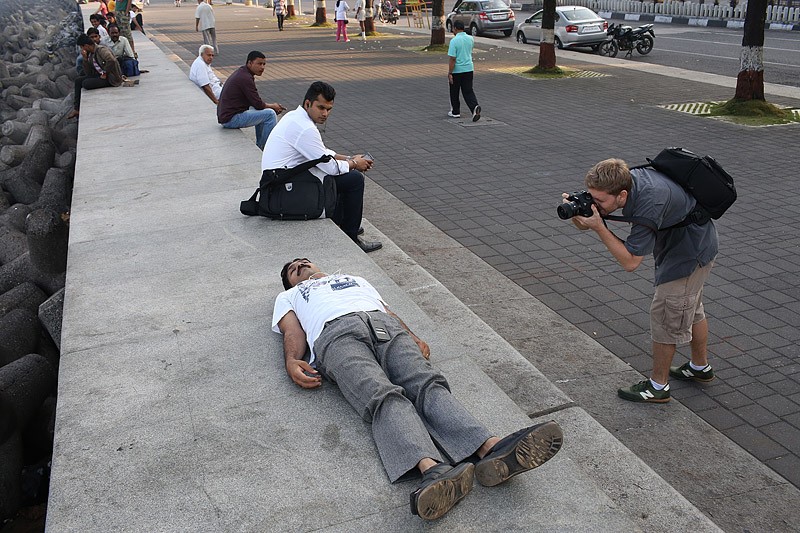 Where is the cinema? It is all around you outside, all over the city, that marvellous, continuous performance of films and scenarios.

Cities are the engines of our global economic paradigm and the arts have not shied away from reflecting this material reality through cultural mirrors. Art reflects, refracts and deflects life from the living on to the rubric of text and visual art. Cities have a unique DNA unto themselves, but also have something universal in this age of neoliberal capitalism: malls dot the landscape from Medan to Muscat, the Americano from Starbucks shall not fail you, thanks to the tropes of quality, driven by standard operating procedures, a way in which imperialism is re-circulated.

Cities are privileged spaces in the eyes of cinema. Cities are often the anchor for the cinematic sector, predominantly coastal with a place in economic trade routes historically: Mumbai, Hong Kong, Cairo, Calcutta and of course Los Angeles. Text and visual art are tools of soft power, hence questions of representation are critical.

Cities have been the muse of writers and directors in India and around the world. A slice of the city in 300 pages or 120 minutes is often our introduction to many beloved cities. Bollywood or the Hindi Film Industry and Indian Writing in English have lent cities their reflections and made them a part of popular discourse. Mumbai is written about in Suketu Mehta’s Maximum City in the most accurate way, a seminal work on exploring the darker underbelly of the megapolis. Mumbai similarly has found notoriety in gangster movies such as D, Company, Satya and most recently, Haseena.

Kolkata on the other hand, has been the muse for movies since the 1950s, such as Howrah Bridge. Over the years, Kolkata has featured as the backdrop for many Bollywood films as well, including but not limited to Devdas, Detective Byomkesh Bakshi, Barfi, Teen, Yuva, Piku, and Kahani. These movies evoke Kolkata as a poignant backdrop for their screenplays, with the Howrah Bridge and the Prinsep Ghat almost visually overpowering the narratives. Kolkata has a strong literary culture, being the fountainhead of Indian Writing in English. Professor Amit Chaudhuri’s Calcutta tells the stories of life lived in the city, as does Kushnava Choudhury’s recent book The Epic City.

Amit Chauduri’s latest book The Friend of My Youth is on the literary topography of South Mumbai, where he grew up, and is a journey through time and space. Such nuance is sadly amiss in cinema about Mumbai. Mumbai is more than VT and Gateway of India and Dharavi. Beautiful stories can be carved out of lives being lived, such as the 2013 indie success Lunchbox, starring Irrfan Khan, Nawazuddin Siddiqui and the old catholic bylanes of Hill Road, Bandra. This was subtle storytelling without the boring guns-and-babes stories that have come to dominate narratives about the city.

The microscopic mechanics of what makes a book great versus a film wonderful to watch are distinctly different to each other. In this age of video, films have a catalytic impact on how cities are constructed in the popular imagination. This has an effect on tourism dollars and employment creation. Books are often the inspiration for films as the raw text.

Representation is an important factor when looking at how cities are framed in books and films. Is Mumbai only gangster-land, or the land of the dream factory? Is Kolkata only the Howrah Bridge, a totem of the past, where the past is the only texture worth portraying? The politics of representation is a complex minefield. Cities are complex creatures and metabolic entities. They are constantly fusing and breaking apart everyday to create a new cartography of imagination. Are books and films doing justice to this? Did Slumdog Millionaire do enough for Mumbai? I think no.

In the Asian context, Hong Kong has been the cinematic cityscape for Chinese cinema, especially the iconic Kowloon waterfront, which has become the stock image for the city. Tintorettor Jishu, a Bengali film about Feluda the detective from Kolkata, has been mostly shot in Hong Kong, with a touristic approach to capturing the city for a regional vernacular audience.

Korean cinema has over-invested in Seoul as the backdrop for its films, which have become cultural ambassadors for Asian developmental modernity. From Kedah, in northern Malaysia to Kohima, in north eastern India’s Nagaland, Korean cinema has become more popular than regional cinema. Japanese literature and cinema particularly Manga, has been bringing the Ginza skyline to the global imagination for the past two decades. Cities have been the site of science fiction, with the catastrophic impacts of climate change or surveillance and on the flip side, the aspirations of the future captured in the backdrop of the city in movies like Minority Report, Blade Runner or Geostorm.

Paris, through its aggressive posturing in the realm of cultural production as The City of Love, has led to the infamous Paris Syndrome[2], where tourists are shocked by the underwhelming romantic experience. Paris is the home of cinema, as is written in the introduction chapter of ‘Cities and Cinema’ by Barbara Mennel[3]:

Paris is the site of the often-reproduced founding myth of cinema: “On December 28, 1895, cinema begins in the basement of the Grand Café, Boulevard des Capucines, Paris,” proclaims Vicky Lebeau. She refers, of course, to the mythical ﬁrst public demonstration of the Cinématographebythe brothers Lumière who dazzled their audience by projecting moving pictures onto a screen. The city is integral to this story of how cinema began. Lebeau records that at the time, journalists described the experience as “excitement bordering on terror,” and on occasion, she concludes, “the terror became panic.” According to Lebeau, this was particularly the case at the showing of the Lumières’ 50 seconds long, silent short ﬁlm The Arrival of a Train at La Ciotat station (1895), which “is supposed to have had spectators rearing away from the screen, the dread of colliding with the rush of that enormous machine too much for those who succumbed to the hallucination of the image.” By conjoining icons of modernity – the story that cinema tells of itself: when the lights go off, an illusion appears and seems so real that we forget we are watching moving pictures.

Bollywood has a long-drawn relationship with the image of Paris, as a backdrop of romance from An Evening in Paris in the 1960s to the Karan Johar directed Ae Dil Hai Mushkil and Aditya Chopra directed Befikre in recent times. Kangana Ranaut’s breakout film in 2014, Queen had a prominent Paris backdrop.

This list can be endless. These images feed into the fascination of the upper class Indian audience, portraying Paris as the place for a dream vacation.

Images of the city are seductive in a way that is not representative of the reality. The other side of this question is: Does the image of the city on the screen have to be authentic? Should cinema be a documentary? Limits of creative imagination and the relation to cinema as politics is as old as the movie industry. Cinema as performance is akin to the rhythms of urbanity, with a pulsating heart and a soul reflective of identity. Cinema riding the globalization wave has led to the popularity of the Hindi movie Dangal in China. Dangal touches on the themes of women empowerment and wrestling, and had dialogues in Haryanvi; but Chinese audiences in the mainland took to the movie in a big way, for its “universal soul[5].”

With sentiments in several countries leaning towards de-globalization, it will be rather fascinating to watch movies, considering that the movie industries based in Los Angeles, Mumbai and Hong Kong are largely liberal. They have an inherent bias towards transnational globalization, seeing as how the elite coastal population has a vested interest (positive bias) towards an integrated market. Netflix is another important instrument of global cosmopolitanism which makes the world democratic, content-wise. Let me suggest a counterfactual: How would the nature of urban representation be in cinema if the film sector were to be based in Delhi, instead of Mumbai, and Chongqing rather than Hong Kong?

Los Angeles is home to the largest Iranian diaspora outside Iran, and is the global capital of entertainment. But how many diaspora stories have come out in Hollywood from its own city?[6] Parsi stories (originally from Iran again) in Bollywood are few and far apart. Iran has an eclectic film industry of its own, and the stories that come from Iran’s cities will no doubt be different again.

Cinema is often left as a tool of entertainment rather than a tool for something greater than itself. Analyzing cinema and its relationship to the city can give us many wonderful insights.

Manishankar Prasad is a writer based in Muscat, Oman. He holds a Master’s degree in Environmental Engineering from the National University of Singapore and has studied at the School of Sociology at Nanyang Technological University. Manishankar has been published in Huffington Post, Social Cops Blog, billionBricks Blog, Alochonna, Corporate Citizenship Briefing and Banglar Kantha Singapore, among others. He blogs at changethinker.com.