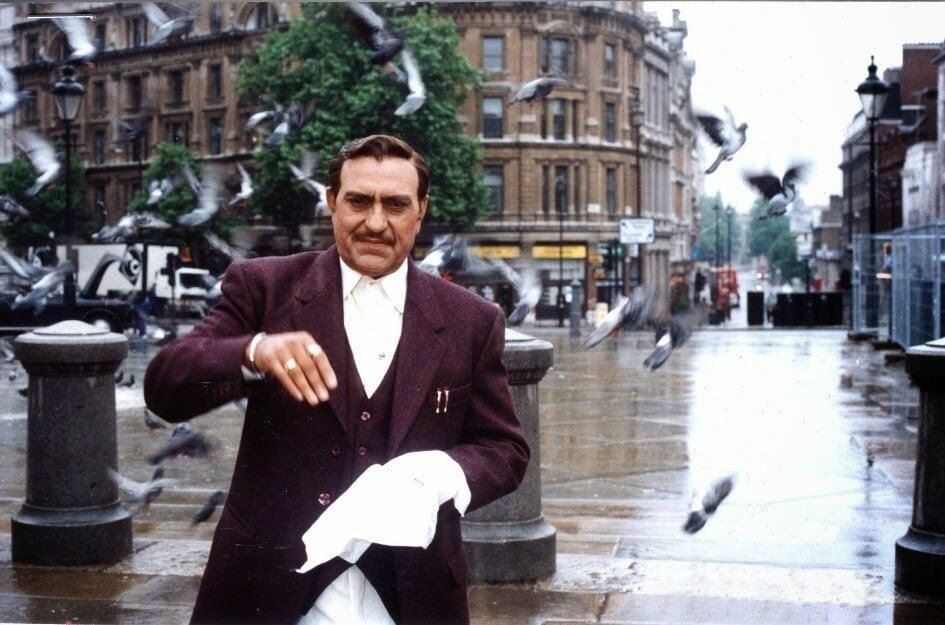 An Indian man stands alone in the middle of Trafalgar Square. He feeds the birds in the crisp morning cold of London. He questions why the streets are unfamiliar to him, why a land he’s lived in for 22 years remains alien to him. Only the birds understand him, as he explains, as they are like him – homeless, halting only where they find food. As he longs for his true home, he closes his eyes and is instantly transported back to Punjab, complete with girls in colorful dresses running through luscious green fields. With the opening of Dilwale Dulhania Le Jayenge, Amrish Puri cemented a character which he would continue in many subsequent films: the proud son of Indian soil who longs to return to his homeland. Poignant or corny? That’s the question. Bollywood has often been criticized in the past for its poor portrayal of Non Resident Indians, or NRIs. Often accused of straying into farce and forced melodrama, it has almost become a sub-genre in itself, often the butt of jokes. But how far from reality is Bollywood’s portrayal of the Indian diaspora?

Dilwale Dulhania Le Jayenge, recognized by the acronym DDLJ, is one of Bollywood’s most beloved films. Raj and Simran’s cross continental pursuit of love has the distinction of being the longest running film in Indian cinema history. Both Raj and Simran represent a genre trope which became commonplace from that point onwards. Simran is the modern girl held down by the weight of her culture. She dreams of a mystery man who is yet to enter her life, wants to go on a trip to Europe with her friends and has the constant axe of an arranged marriage hanging over her head. In a particularly poignant scene, her mother (played by Farida Jalal) explains to her the reality that Indian women are painfully reminded of at some point, that a woman has no right to happiness. This is directly at odds with the upbringing she has had in England, in which she dared to dream of marrying a man of her choice.

Trope number 1: The cultural conflict of being in a progressive society but having to stay loyal to your Indian traditions

Comparing this movie to Gurinder Chadha’s Bhaji On The Beach, which was only made two years prior to DDLJ, we find that there are some similarities in the portrayal of Indian women. We see similar themes of conflict between the modern and the traditional, and of young women wanting to choose their own partners. In fact, Gurinder Chadha’s short film A Nice Arrangement, made the following year actually revolves around a British Indian girl going through an arranged marriage. So what really is the difference? Well, the form of course is what stands out the most. Gurinder Chadha’s films follow a more British sensibility of filmmaking, influenced heavily by the kitchen sink realism of 60s British cinema. There’s absolutely no sign of any kitchen sinks in DDLJ. If Gurinder Chadha was to direct DDLJ, it might possibly be a bit more like Bhaji On The Beach.

Raj represents another trait of NRIs which became a staple for many Bollywood films that followed: he’s rich. Really rich. Really really rich. This is actually now a very common portrayal of NRIs in Bollywood films. It is not without its small truths. Indians have travelled around the world for decades now and often bring a great deal of prosperity to areas they occupy. A study in 2007 found that British Indians have the lowest poverty rates among different ethnic groups in Britain, second only to white British1. Similar observations have been made in other countries, including the United States. An article in The Economist claimed that “Today Indian-born Americans number 2 million and they are probably the most successful minority group in the country. Compared with all other big foreign-born groups, they are younger, richer and more likely to be married and supremely well educated2.” So in this particular instance, Bollywood has somewhat reflected reality.

This being Bollywood, everything is greatly exaggerated. Take for instance in Kabhi Khushi Kabhie Gham when Shah Rukh Khan is banished from his family and moves to London with his wife, sister in law and nanny. He supposedly starts from scratch with a family he now needs to support. By the time his long lost brother finds him years later, he is living at a swanky mansion at the address: 8 Ingram Avenue, Hampstead, London, NW11. Believe it or not, this is a real address in London. The actual building in question, which we are expected to believe King Khan has moved into in just a few years of being in the country, in reality, (according to property website rightmove.co.uk) has 3 reception rooms, 8 bedrooms, 5 bathrooms and a swimming pool, and was sold in 2014 for the cool fee of £7.4 million. Shah Rukh is clearly onto an investment trick that the rest of us haven’t caught up with yet…

These eye watering numbers are just what is expected of an NRI in a Karan Johar movie. Karan Johar has long dabbled with the representation of the Indian diaspora, and his films were, more often than not, huge hits in the overseas market. During that period, Shah Rukh Khan was also the king of the overseas Indian market. But there has been a significant change in that trend since then. The highest grossing films outside India are now the likes of Dangal, pk and Baahubali, films which have no themes of diaspora whatsoever. In fact, Aamir Khan has been more popular in the overseas market in recent years than Shah Rukh. Aamir has made a significant attempt to address themes related to societal problems within India, rather than the wider global Indian community. Even in the UK, films about British Indians have largely dried up. Television comedy shows like Goodness Gracious Me and The Kumars at Number 42 are a distant memory. When trying to analyze this change in trend, the most obvious parallel social trend is the shift in thinking about India, from a third world country to emerging global economic force. As the economy in India improved, their need to dream of an NRI lifestyle decreased. When Indian PM Narendra Modi visited the UK, a crowd of 60,000 people attended. This level of frenzy can also be correlated to the reactions of Indians around the world to the new shape that the country is taking. The economy is looking up, India wins the cricket World Cup, Britain is rolling out the biggest of red carpets for the Indian PM; the focus of interest shifts from the diaspora back to the motherland. This shift in interest can be seen in cinema as well, with both Indians at home and abroad flocking to watch the same films.

So when is an Indian not an Indian? Well, that depends on what you think an Indian is. When it comes to style and form, the British films made about British Indians have very little correlation to the films being made in India. But if we’re talking about theme and subject, then there is not much of a difference between the portrayal of the Indian in India and the Indian abroad. They have the same issues, they face the same troubles and they live the same lives. There is a common thread which unites the different portrayal of Indians, whether they choose to be subtle or over the top. And if we take recent cinematic trends into consideration, then Indians have never been as Indian on screen as they are right now.

Whether we will eventually see another shift of interest back to the Indian diaspora in coming years remains to be seen; but in what form and what themes we will find it in is an ever changing question, spurned by the ever changing answer of what it means to be an Indian.

Aashish Gadhvi is a filmmaker based in London. He has two film degrees: in Film and TV Production and Documentary Filmmaking. Aashish is an avid fan of world cinema. He is interested in Indian, South Korean and Japanese films. He has worked on feature films and is currently making his own short films.

Divya Mohun is a film and television enthusiast who is slowly rediscovering her artistic abilities. You can follow her work at divyalikestodraw on Instagram.