In Prateek Vats’s Eeb Allay Ooo!, Anjani is a young man looking for a job. His home is a small room that he shares with his sister and brother-in-law, in one of the many settlements strewn around New Delhi. He comes from a place that isn’t a place, where even the most permanent structures appear makeshift, resigned to the eventual ordinance that might send a JCB their way, to allow for property development. In this way, Anjani is invisible too, yet another young man conscripted into loneliness and desperation, a man who has one long bright red nail on his hand, a man who spends his life suffering the whims of men who have power over him.

Through a friend, Anjani lands a job as a monkey-frightener, a job most unsuitable for this soft-spoken man. He is simply unable to make the sounds required of him—Eeb! Allay! Ooo!—and he seems terrified of the street-smart primates that populate his workplace.

We see a man with votive offerings placed carefully on his bike. He has come to pray to the monkeys, for the afterlife of his ancestors, and he offers them food. When Anjani tells him he isn’t supposed to feed the monkeys, he responds aggressively, in the manner of someone used to having his way, placed above Anjani in the caste and class pyramid: “Who is your contractor? Who are you? Are you new here?”

Anjani cannot take a ten minute tea break, without money being held back from his salary. His manager channels the meanspiritedness of petty people everywhere, who take out their frustrations on those under them. It is hopefully not lost on us that monkeys can jump over walls and enter the hallowed grounds of Delhi’s very important houses, while the people whose labour makes such lives possible have to look from the outside.

Eeb Allay Ooo! was screened as part of We are One, a global film festival that took place on YouTube, in support of COVID-19 relief measures. Before the film began, director Prateek Vats shared a few words. “I hope we come out of this crisis with human dignity intact,” he said. We really haven’t.

Nasir, another film that premiered at the We are One online film festival, follows its eponymous protagonist as he goes about his life in Coimbatore. A salesman in a garment shop, and a poet otherwise, Nasir isn’t yet broken down by the monotony of life. He finds joy in stolen moments of leisure, in the easy intimacy he shares with his wife, and in the romantic letters he writes to her. All around him, we see signs of growing Islamophobia, expressed both as outright atrocities committed against Muslims, and as a renewed fervour with which Hinduism is practiced. With anti-Muslim rhetoric being approved by the country’s most powerful, there exists a numbness in the people, for they have become accustomed to casual acts of violence that denounce a minority group as outsiders and traitors.

There is always the question of who a film is for. Who is the audience that the filmmaker imagines, or desires? Is Nasir a plea to the fence sitter, unconcerned with societal changes that do not affect them, is it a lament that Muslims are never safe in India, will it encourage the bigot to consider the humanity of an imagined opponent? Tamil films almost never present Muslim characters as people with a full range of experiences. They are usually a plot device to convey messaging on terrorism and peace, or as comedic set pieces that resort to the lazy trope of a Muslim man being a butcher.

It is a rare thing to watch a vulnerable man in Indian cinema. We are used to seeing men enamoured of traditional masculinity, quick to anger and eager to fight, foot soldiers of a system that expects them to carry on without emotions. Nasir and Anjani are somehow immune to this empty bravado; they yearn for human connection and remain in touch with their feelings. 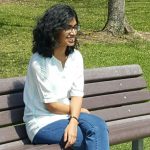 Kalakki is an art series started by Charles Britto and Mohamed Salegh, in which they take a painting and a scene from an Indian movie, and put the two together. The result is often whimsical, funny, beautiful, unexpected.