Bengal has an immense fascination with ghosts. Bengali literature as well as folktales passed down through generations have always featured ghost stories. The Hindu community in Bengal has special festivals to celebrate Ghosthood or Ghostdom. Bhoot Chaturdashi is one of them. It occurs on the fourteenth day of Krishna Paksha (the waning phase of moon), on the night before Kali Puja/Diwali. On this night, fourteen earthen lamps are shown to the spirits of ancestors as it is believed the light helps these spirits find their way home and bless the family. It is also believed that Goddess Kali in her Chamunda avatar wards off evil spirits as fourteen earthen lamps are lit at different entrances and dark corners of the house on this day. Bengali kids are aware of ghosts and other entities from a young age.

As Bengal has a rich ghost culture, it is customary to introduce the readers to some of our Bengali Ghosts. Let’s start with Petni. Petnis are ghosts of young unmarried women who died before they could experience the pleasures of married life. They are always on the lookout to possess married women and fulfill their unrequited desires. Also, they are very particular about their wardrobe and are seen wearing a red or white sari. Monochrome ghosts, not technicolour.

A second almost-famous ghost is the Mecho Bhoot. Bengalis are obsessed with fish, so it’s obvious our ghosts should be ‘fishy’ too.. These ghosts love to eat fish. The word mechho means machh [fish] in Bengali. Mecho Bhoots are prime time real estate agents of the other world as they reside mostly near village ponds or lakes, which are full of fish. But they are ghosts with self-respect. They never steal. They’d rather ask late night fishermen or someone carrying a fish, “Machh diye ja” [Give me the fish]. If the person refuses to hand over the fish, the Mecho Bhoot threatens to harm them. Machh-mania!

Then we have the Mamdo Bhoot, spirits of Bengali Muslims, and the Gecho Bhoot [Tree Ghost], a long-lost cousin of Mecho Bhoot, that lives on trees. And just like Sleepy Hollow has its own headless horseman, Bengal has the Skondhokata [Headless Ghost] – spirit of people who lost their heads in accidents. We also have the regular Dainee [Witch] who is believed to be a practitioner of black magic and our very own veteran ghost, the Brohmodoitti, believed to be the ghost of holy Brahmins. These vegetarian ghosts live on the bel gach [wood apple tree], because even in the afterlife, they are worshippers of Lord Shiva. They wear the dhuti [traditional Bengali dress for men] and the poite [holy thread] on their body. They are depicted as kind and learned ghosts.

Bengali children fall under two categories: those who grew up hearing too many ghost stories and are so afraid of ghosts that they sleep with the lights on (irrespective of age), and those who don’t fear them at all. Like me! As a kid, I was pretty much a clone of Dennis. My mother feared constantly for my safety as there was hardly anything I wouldn’t do to seek a thrill, from climbing mango trees to roaming around the pukur-par [pond side] at night. You name it and chances are I’ve done it, or at least attempted it. So it was understandable when my mother made use of scary ghost stories to keep me away from danger. Unfortunately, it didn’t have the effect she was hoping for. The more these stories were told to scare me, the more I found them interesting. I was fascinated by ghosts and read any horror book I could lay my hands on.

As a kid growing up in the late eighties, I didn’t have access to satellite dishes and a buffet of TV channels. We were lucky if we owned a colour television and our parents let us watch Doordarshan, the only channel available then, run by the state. Doordarshan, I must say, still wins when it comes to television content. It had the best entertainment. We didn’t have to watch saas-bahu fights (daily soap dramas showcasing the numerous ways a mother-in-law and daughter-in-law can antagonize each other) and prime time soap heroines turning into a flies. For the younger audience, Doordarshan had Vikram-Betal, like Aesop’s Fables, where a story was told by the ghost Betal to King Vikram. A question was asked at the end to test Vikram’s wit. If he answered correctly, he lived to see another day or else his head would break into pieces. What fun! Later, Zee TV came forward with The Zee Horror Show whose title track is so famous that any nineties kid can identify it from a mile away. It was scary too.

But these healthy doses of horror gave me a veritable appetite for more horror, and by the time I grew up, I had already moved on to greener pastures of the horror genre, with The Ring series (English and Japanese), The Grudge, Dark Water, the very American The Exorcist, Evil Dead, and most recently the Conjuring series. I still think The Blair Witch Project tops the chart for being the most realistic horror movie, followed by Paranormal Activity (1 and 2). But my satisfaction ends here.

Bollywood horror movies in recent times have been very disappointing. Sure, we’ve had few good ones earlier: Bees Saal Baad (1962), Do Gaz Zameen Ke Neeche (1972), Raat (1992), Darna Mana Hai (2008), 1920 (2008) and the Raaz series (2002-2016). Plenty of Hindi horror movies have released during this time; yet none of them measured up to the expectations of this horror aficionado. They seemed like romantic movies with a dollop of horror. They lacked the true punch of a good horror movie, they didn’t scare me enough.

When the teaser for Pari released a few months back, I took note. Clean Slate films, actor Anushka Sharma and her brother Karesh Sharma’s film production and distribution company, had given us two refreshing movies in the past – NH10 (2015) a thriller directed by Navdeep Singh, loosely based on the 2007 Manoj-Babli honour killing case, and Phillauri (2017) also directed by Navdeep Singh, a fantasy comedy in which a boy marries a ghost accidentally and helps her find the true purpose of her (after)life.

Pari – not a fairy tale

Pari [fairy, in Hindi], is not a fairy tale as its name suggests and this is evident from the very first scene. Bengali actor Parambrata Chatterjee plays the role of Arnab, a Bengali boy from Kolkata. He is returning from Barrackpore with his parents, having met Piyali (Ritabhari Chakraborty), his prospective bride. There is a heavy downpour.

A horror movie buff would know that the stage is being set for some good old spooks. While driving the car in the rain, Arnab’s father hits an old lady and she dies on the spot. A police investigation reveals the lady to be kutte-wali [stray-dog keeper] residing in the jungle in a small hut. The police and Arnab reach the hut to find it heavily guarded by stray dogs. Inside the dark, dingy hovel they find Rukksana or Rukku (Anushka Sharma, without makeup), her leg chained to a pole.

She is informed of her mother’s death, which Arnab says is a suicide to save his father from the law enforcement. Feeling guilty about the accident, Arnab pities Rukku and brings her to his apartment in Kolkata, where he lives by himself.

Rukku is tormented by some entity and often buries her head in a bucket of water to escape it. Slowly, Arnab and Rukku fall in love and consummate the relationship, although Piyali still remains a part of his life. As the story unfolds, several discoveries are brought to light about who Rukku really is and what binds her to the devil. The film explores the struggles of a witch and a human as they attempt to survive with each other.

Pari deviates from the traditional Bollywood horror movie. I could hear screams and gasps from nearby seats in the movie hall. The last time I heard such reactions was during a screening of The Conjuring 2. When a movie manages to scare its audience without prosthetic makeup and a background theme, you know the movie is brilliant. Also, living in the Middle-East, this was one of those rare occasions locals had showed up to watch a Hindi movie, something I didn’t observe even for hype-machines like Tiger Zinda Hai or Padmaavat.

The scene in which Rukku is first found in the hovel with long, unbound hair, scratches and red marks on her ankle (from being tied up for months), and a face devoid of any presumption, is spine-chilling.

Another noteworthy scene – Piyali suddenly drops by to visit Arnab, who asks Rukku to hide. Piyali and Arnab share a moment and just as Piyali leans in to kiss him, Arnab finds Rukku on the terrace with her head upside down, hair hanging down, looking at him. That scene was truly a delight.

A battered, bruised and red-eyed Rukku laughing when she is possessed by the Devil is another memorable scene. The movie does not have typical scares like a body in the bathtub, a hand in the shower, a ghost pulling your leg while you sleep, or a door closing only to reveal a ghost behind it. There are many novel scenes that give Pari an edge over other movies of this genre. 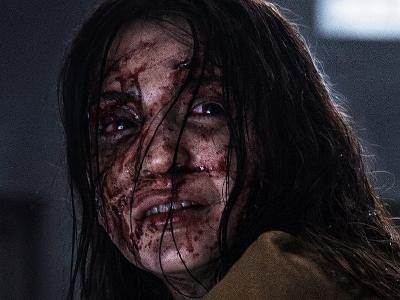 Pari had a fresh approach as it delved into the romance between a demonic fairy and a human, without the adding hypnosis into the mix. Pari has that old-world horror movie charm which went missing from Hindi cinema in the early nineties. Watching the movie reminded me of the nuances employed by directors like Tulsi and Keshu Ramsay, Raja Nawathe, Biren Nag, and Mohan Bakri. Their televised horror was heartfelt and not meant for cheap thrills. Their movies haunted the audience long after they were over. Devoid of any embellishments, these movies relied solely on the script, some old-fashioned acting and great direction. Pari seems to have brought back the magic of those classics. Here’s hoping Bollywood finally manages to break away from its stereotypes and make horror movies with genuine scares!

Elakkiya is a Digital Artist. She loves to paint portraits, fan art and textures. She works in television and entertainment. She believes in coffee, good books, great stories and her notebook. You can find her work on Instagram.

Images may not reproduced without permission.