I can say with some confidence that I love Tamil cinema the way I love my family. I detest it, despise it, criticize it, but I keep going back to it. I demand it be better, for myself and for its own sake. Infrequently, I come across a book that makes me think it was written for me. Perhaps I am the reader the author had in mind, if I may be so presumptuous, the reader that was wished for as the book was written.

Imagine the full moon, and lonely roads. The night wears the green smell of summer. It holds sweat and moist air, pollen and tiny flowers. Rain falls without warning, little drops streaking against the yellow of the streetlights. A young couple drives through these roads, letting the air in through the windows, listening to Ilayaraja’s music from a memory stick. En Iniya Pon Nilave comes on. The moment overwhelms them, and they stop the car. They don’t talk. The moon, the gentle rain, the music, these demand their silence.

One of them whispers, “I feel like we are in a movie.”

I was one of two people in that car on that summer night.

Often, I have likened my life to a movie, or thought it should be a movie. When situations become difficult to handle, I see them as visuals in a Tamil film. Reel World takes the question, What happens to life when everything begins to look and feel like film, and explores all the different ways in which cinema reflects life, and life by itself is experienced as cinema. The book opens with the stunning image of a man, Logandurai, “a farmer of modest means,” at work in his field. He is planting onion bulbs. As he works, he sings a film song. He sings of hope and desire, as though he were not Logandurai the farmer, but rather Logandurai the heroic son of the soil who worships his mother, motherland, and mother tongue. 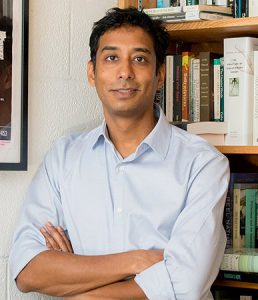 The author says, “These were the conditions of his life. And yet, despite its relentless difficulties, Logandurai could experience this life as a cinematic scene: not in a spirit of escape but instead as the deepest expression of its hope.”

Reel World also follows the making of several Tamil movies, from the birth of an idea in a claustrophobic room, to the opening weekend shows in raucous theatres. It tries to capture the spark of creativity, what is it that leads to the pure moment of an idea being conceived. There is no easy answer. Creators are themselves puzzled; they think they are mere vessels for the creativity that somehow flows through them. Sometimes, they attribute it to the deity of learning. We also see the hard work that makes movies possible, the unique attitude of accepting everything that happens on a given day, and using happy accidents to one’s advantage.

There are numerous conversations with those involved in making a film: executive producer, director, cinematographer, assistant director, music director, lyricist, choreographer, stunt master, hero, heroine, item girl. The author is mostly an observer in the chaos, he watches how dreams are made and sold; he is the camera that does not judge.

This book is organized in a unique way: the chapters are titled Dreams, Hope, Love, Time, Rhythm and so on. Each chapter attempts to describe one craft in film-making: writing, lighting, shooting, composing, editing, distribution, to name a few. There is a charming anecdote in there too, about how the author’s American accent was used as Obama’s voice in C.S. Amudhan’s spoof movie Thamizh Padam.

One section that was quite affecting for me was the time he spent on location during filming of an item song for the movie Baana Kaathadi (Chapter 12, Pleasure). I am always conflicted by item songs. The catchy music, the dance steps I try to copy in the privacy of my room, the beautiful women; I like all of it. Then I think about the lyrics, the objectification, the marketing of an attractive young woman to a sleazy, hungry, captive audience both on screen and outside. The author talks to the dancer who mouths suggestive lyrics without knowing the language and who tries her best to seduce the camera. She knows who she is, in this space overflowing with men, where she is asked to pander to more voyeuristic men. She admits to some discomfort in one instance, but then takes it in her stride.

The author writes, “She speaks to me in confidence, although I too am a voyeur here, another man looking on. Her candor is both wrenching and magnetic.”

I found the writing enjoyable, even the experimental and exhibitionist bits. Chapter 7, Desire, is written as one single sentence. It follows the making of a honeymoon drama by Selvaraghavan, a project that was stopped midway.

I would like to ask Anand Pandian how his interest in Tamil cinema developed, considering he grew up outside the country. Often, I meet Tamil people who grew up in the United States just like him, and the idiom of Tamil cinema is incomprehensible to them. It is not difficult to see why. I know plenty of people who have an understanding of the context, but still consider regional cinema to be kitschy, a lesser art. I would like to ask him about the audience he had in mind while writing this book, seeing as how he examined the subject from the perspective of a cultural anthropologist.

It can arguably be said that Tamil culture, at this point, is cinema. I wonder what he makes of that.